EFFECT OF RAINFALL INTENSITY, SLOPE, LAND USE AND ANTECEDENT SOIL MOISTURE ON SOIL EROSION IN AN ARID ENVIRONMENT 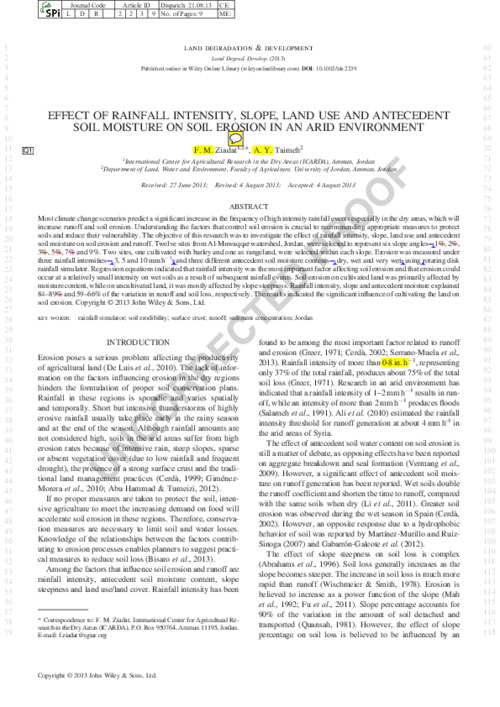 Most climate change scenarios predict a significant increase in the frequency of high intensity rainfall events especially in the dry areas, which will increase runoff and soil erosion. Understanding the factors that control soil erosion is crucial to recommending appropriate measures to protect soils and reduce their vulnerability. The objective of this research was to investigate the effect of rainfall intensity, slope, land use and antecedent soil moisture on soil erosion and runoff. Twelve sites from Al-Muwaqqar watershed, Jordan, were selected to represent six slope angles: 1, 2, 3, 5, 7 and 9%. Two sites, one cultivated with barley and one as rangeland, were selected within each slope. Erosion was measured under three rainfall intensities: 3, 5 and 10 mm h−1; and three different antecedent soil moisture contents: dry, wet and very wet; using a rotating disk rainfall simulator. Regression equations indicated that rainfall intensity was the most important factor affecting soil erosion and that erosion could occur at a relatively small intensity on wet soils as a result of subsequent rainfall events. Soil erosion on cultivated land was primarily affected by moisture content, while on uncultivated land, it was mostly affected by slope steepness. Rainfall intensity, slope and antecedent moisture explained 84–89 and 59–66% of the variation in runoff and soil loss, respectively. The results indicated the significant influence of cultivating the land on soil erosion.