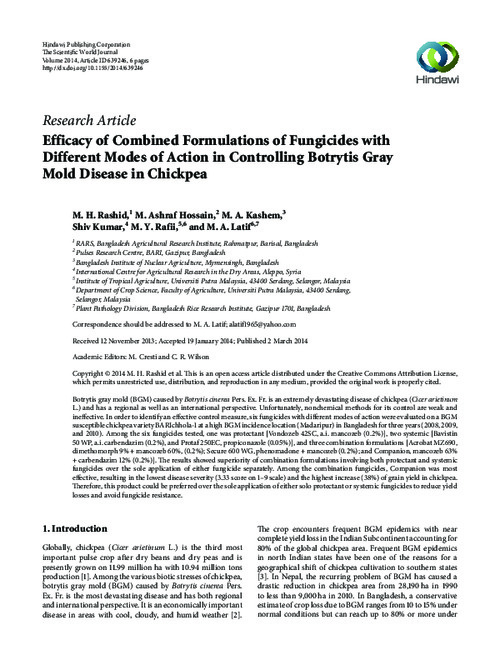 Botrytis gray mold (BGM) caused by Botrytis cinerea Pers. Ex. Fr. is an extremely devastating disease of chickpea (Cicer arietinum L.) and has a regional as well as an international perspective. Unfortunately, nonchemical methods for its control are weak and ineffective. In order to identify an effective control measure, six fungicides with differentmodes of action were evaluated on a BGM susceptible chickpea variety BARIchhola-1 at a high BGMincidence location (Madaripur) in Bangladesh for three years (2008, 2009, and 2010). Among the six fungicides tested, one was protectant [Vondozeb 42SC, a.i. mancozeb (0.2%)], two systemic [Bavistin 50WP, a.i. carbendazim (0.2%), and Protaf 250EC, propiconazole (0.05%)], and three combination formulations [AcrobatMZ690, dimethomorph 9% + mancozeb 60%, (0.2%); Secure 600WG, phenomadone +mancozeb (0.2%); and Companion, mancozeb 63% + carbendazim 12% (0.2%)]. The results showed superiority of combination formulations involving both protectant and systemic fungicides over the sole application of either fungicide separately. Among the combination fungicides, Companion was most effective, resulting in the lowest disease severity (3.33 score on 1–9 scale) and the highest increase (38%) of grain yield in chickpea. Therefore, this product could be preferred over the sole application of either solo protectant or systemic fungicides to reduce yield losses and avoid fungicide resistance.