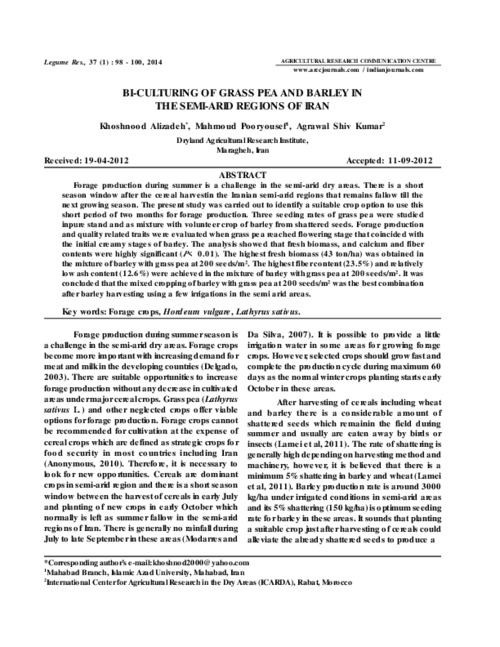 Forage production during summer is a challenge in the semi-arid dry areas. There is a short season window after the cereal harvestin the Iranian semi-arid regions that remains fallow till the next growing season. The present study was carried out to identify a suitable crop option to use this short period of two months for forage production. Three seeding rates of grass pea were studied inpure stand and as mixture with volunteer crop of barley from shattered seeds. Forage production and quality related traits were evaluated when grass pea reached flowering stage that coincided with the initial creamy stages of barley. The analysis showed that fresh biomass, and calcium and fiber contents were highly significant (P< 0.01). The highest fresh biomass (43 ton/ha) was obtained in the mixture of barley with grass pea at 200 seeds/m². The highest fiber content (23.5%) and relatively low ash content (12.6%) were achieved in the mixture of barley with grass pea at 200 seeds/m². It was concluded that the mixed cropping of barley with grass pea at 200 seeds/m² was the best combination after barley harvesting using a few irrigations in the semi arid areas.