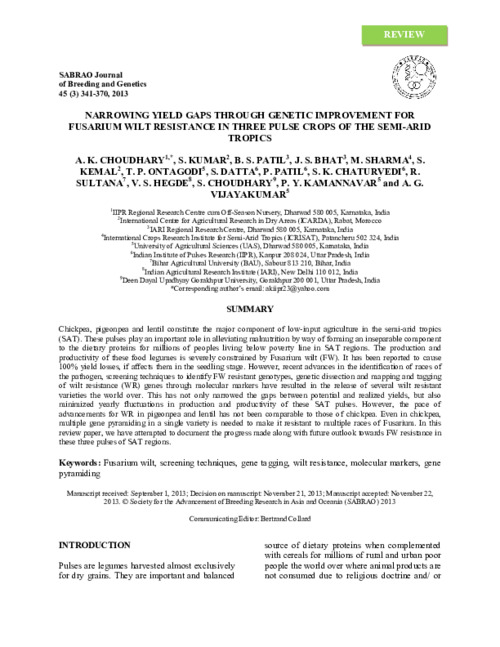 Chickpea, pigeonpea and lentil constitute the major component of low-input agriculture in the semi-arid tropics (SAT). These pulses play an important role in alleviating malnutrition by way of forming an inseparable component to the dietary proteins for millions of peoples living below poverty line in SAT regions. The production and productivity of these food legumes is severely constrained by Fusarium wilt (FW). It has been reported to cause 100% yield losses, if affects them in the seedling stage. However, recent advances in the identification of races of the pathogen, screening techniques to identify FW resistant genotypes, genetic dissection and mapping and tagging of wilt resistance (WR) genes through molecular markers have resulted in the release of several wilt resistant varieties the world over. This has not only narrowed the gaps between potential and realized yields, but also minimized yearly fluctuations in production and productivity of these SAT pulses. However, the pace of advancements for WR in pigeonpea and lentil has not been comparable to those of chickpea. Even in chickpea, multiple gene pyramiding in a single variety is needed to make it resistant to multiple races of Fusarium. In this review paper, we have attempted to document the progress made along with future outlook towards FW resistance in these three pulses of SAT regions.