MEASURING THE IMPACT OF AGRICULTURAL RESEARCH: THE CASE OF NEW WHEAT VARIETIES IN TURKEY 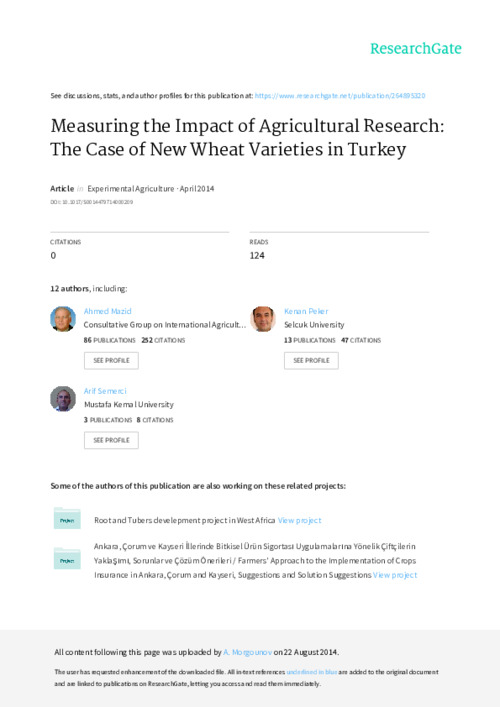 This paper summarizes a study initiated by the Turkish General Directorate of Agricultural Research and ICARDA/CIMMYT Wheat Improvement Program on the adoption of five new winter and spring wheat varieties developed and released by the Turkish national breeding program and through international collaboration in the past 10 years. The study results are based on a survey of 781 households selected randomly in the Adana, Ankara, Diyarbakir, Edirne, and Konya provinces of Turkey. The five new wheat varieties are compared to old improved varieties released prior to 1995 that are also still grown by farmers. Technical and biological indicators of impacts including crop productivity are measured to determine the impact of these varieties. Yield stability is assessed by comparing average yields in normal, good and dry years and by comparing the coefficients of variation of yields by variety. Profitability is measured by the gross margin generated per unit of land. Household income from wheat and for all economic activities are estimated and compared between adopters and non-adopters. Adopters of the new varieties have higher per-capita income than non-adopters as compared to the same group using old varieties. However, the overall impact of the improved varieties is generally low, mainly due to their low adoption levels. Farmers’ knowledge and perception of certain variety characteristics and unavailability of adequate and timely seed are the main reasons. Increasing adoption has the potential to improve household income and this requires revising wheat impact pathway to achieve the expected impact.