Agromorphological Traits Variability of the Ethiopian Lentil and Exotic Genotypes 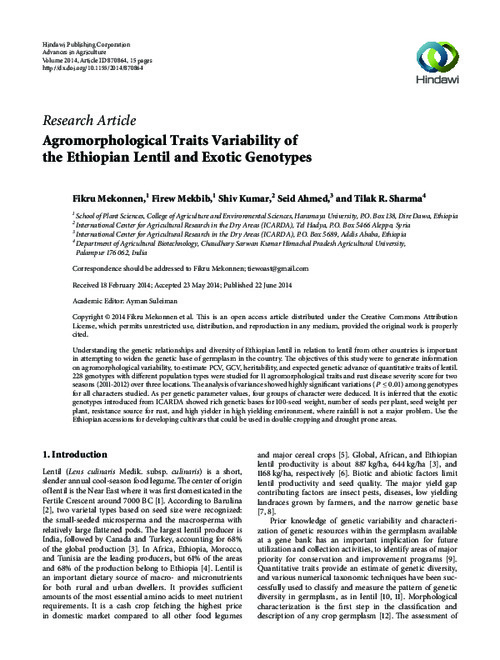 Understanding the genetic relationships and diversity of Ethiopian lentil in relation to lentil from other countries is important in attempting to widen the genetic base of germplasm in the country. The objectives of this study were to generate information on agromorphological variability, to estimate PCV, GCV, heritability, and expected genetic advance of quantitative traits of lentil. 228 genotypes with different population types were studied for 11 agromorphological traits and rust disease severity score for two seasons (2011-2012) over three locations.The analysis of variance showed highly significant variations (? ≤ 0.01) among genotypes for all characters studied. As per genetic parameter values, four groups of character were deduced. It is inferred that the exotic genotypes introduced from ICARDA showed rich genetic bases for 100-seed weight, number of seeds per plant, seed weight per plant, resistance source for rust, and high yielder in high yielding environment, where rainfall is not a major problem. Use the Ethiopian accessions for developing cultivars that could be used in double cropping and drought prone areas.