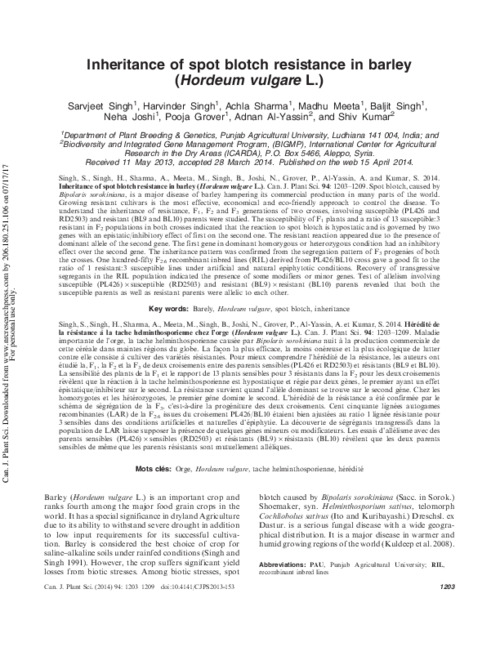 Singh, S., Singh, H., Sharma, A., Meeta, M., Singh, B., Joshi, N., Grover, P., Al-Yassin, A. and Kumar, S. 2014. Inheritance of spot blotch resistance in barley (Hordeum vulgare L.). Can. J. Plant Sci. 94: 1203–1209. Spot blotch, caused by Bipolaris sorokiniana, is a major disease of barley hampering its commercial production in many parts of the world. Growing resistant cultivars is the most effective, economical and eco-friendly approach to control the disease. To understand the inheritance of resistance, F1, F2 and F3 generations of two crosses, involving susceptible (PL426 and RD2503) and resistant (BL9 and BL10) parents were studied. The susceptibility of F1 plants and a ratio of 13 susceptible:3 resistant in F2 populations in both crosses indicated that the reaction to spot blotch is hypostatic and is governed by two genes with an epistatic/inhibitory effect of first on the second one. The resistant reaction appeared due to the presence of dominant allele of the second gene. The first gene in dominant homozygous or heterozygous condition had an inhibitory effect over the second gene. The inheritance pattern was confirmed from the segregation pattern of F3 progenies of both the crosses. One hundred-fifty F2:6 recombinant inbred lines (RIL) derived from PL426/BL10 cross gave a good fit to the ratio of 1 resistant:3 susceptible lines under artificial and natural epiphytotic conditions. Recovery of transgressive segregants in the RIL population indicated the presence of some modifiers or minor genes. Test of allelism involving susceptible (PL426)×susceptible (RD2503) and resistant (BL9)×resistant (BL10) parents revealed that both the susceptible parents as well as resistant parents were allelic to each other.