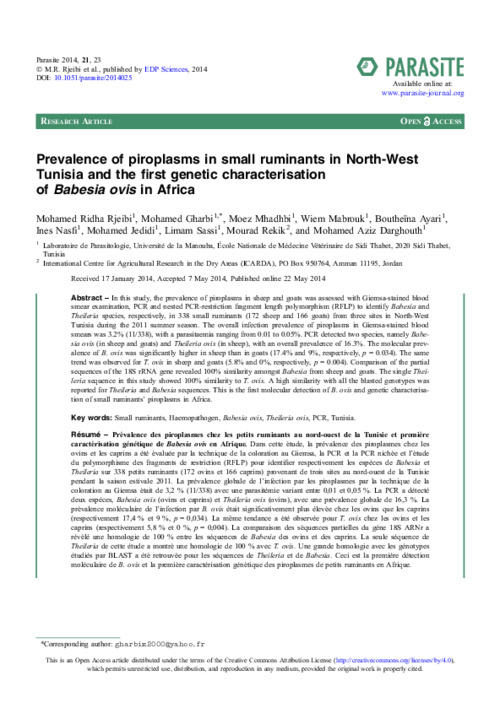 In this study, the prevalence of piroplasms in sheep and goats was assessed with Giemsa-stained blood smear examination, PCR and nested PCR-restriction fragment length polymorphism (RFLP) to identify Babesia and Theileria species, respectively, in 338 small ruminants (172 sheep and 166 goats) from three sites in North-West Tunisia during the 2011 summer season. The overall infection prevalence of piroplasms in Giemsa-stained blood smears was 3.2% (11/338), with a parasitaemia ranging from 0.01 to 0.05%. PCR detected two species, namely Babesia ovis (in sheep and goats) and Theileria ovis (in sheep), with an overall prevalence of 16.3%. The molecular prevalence of B. ovis was signiﬁcantly higher in sheep than in goats (17.4% and 9%, respectively, p = 0.034). The same trend was observed for T. ovis in sheep and goats (5.8% and 0%, respectively, p = 0.004). Comparison of the partial sequences of the 18S rRNA gene revealed 100% similarity amongst Babesia from sheep and goats. The single Theileria sequence in this study showed 100% similarity to T. ovis. A high similarity with all the blasted genotypes was reported for Theileria and Babesia sequences. This is the ﬁrst molecular detection of B. ovis and genetic characterisation of small ruminants’ piroplasms in Africa.