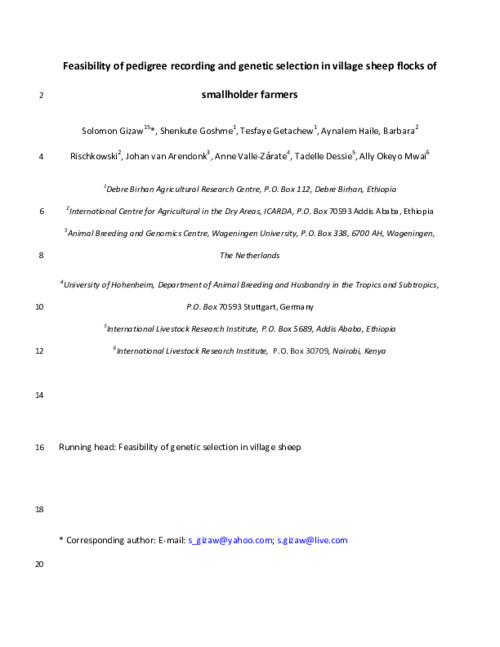 Pedigree recording and genetic selection in village flocks of smallholder farmers have been deemed infeasible by researchers and development workers. This is mainly due to the difficulty of sire identification under uncontrolled village breeding practices. A cooperative village sheep-breeding scheme was designed to achieve controlled breeding and implemented for Menz sheep of Ethiopia in 2009. In this paper, we evaluated the reliability of pedigree recording in village flocks by comparing genetic parameters estimated from data sets collected in the cooperative village and in a nucleus flock maintained under controlled breeding. Effectiveness of selection in the cooperative village was evaluated based on trends in breeding values over generations. Heritability estimates for 6-month weight recorded in the village and the nucleus flock were very similar. There was an increasing trend over generations in average estimated breeding values for 6-month weight in the village flocks. These results have a number of implications: the pedigree recorded in the village flocks was reliable; genetic parameters, which have so far been estimated based on nucleus data sets, can be estimated based on village recording; and appreciable genetic improvement could be achieved in village sheep selection programs under low-input smallholder farming systems.