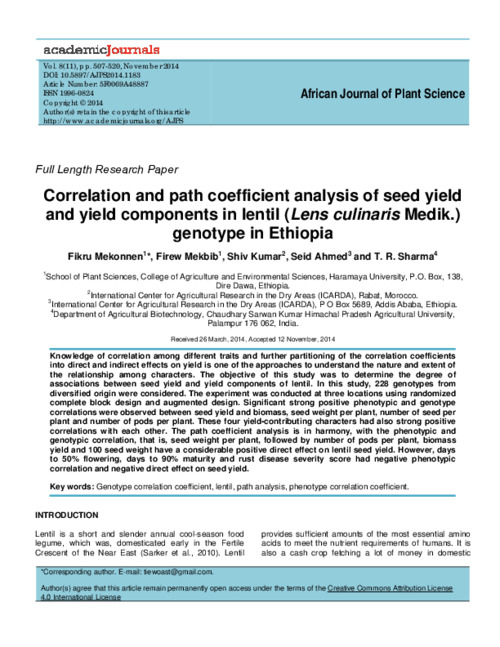 Knowledge of correlation among different traits and further partitioning of the correlation coefficients into direct and indirect effects on yield is one of the approaches to understand the nature and extent of the relationship among characters. The objective of this study was to determine the degree of associations between seed yield and yield components of lentil. In this study, 228 genotypes from diversified origin were considered. The experiment was conducted at three locations using randomized complete block design and augmented design. Significant strong positive phenotypic and genotype correlations were observed between seed yield and biomass, seed weight per plant, number of seed per plant and number of pods per plant. These four yield-contributing characters had also strong positive correlations with each other. The path coefficient analysis is in harmony, with the phenotypic and genotypic correlation, that is, seed weight per plant, followed by number of pods per plant, biomass yield and 100 seed weight have a considerable positive direct effect on lentil seed yield. However, days to 50% flowering, days to 90% maturity and rust disease severity score had negative phenotypic correlation and negative direct effect on seed yield.