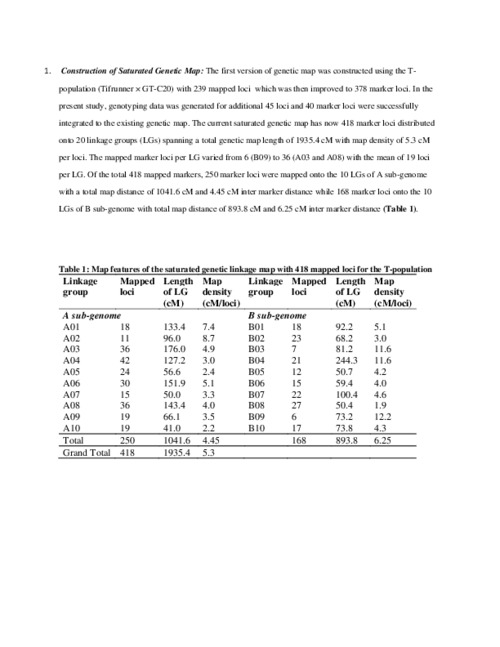 The first version of genetic map was constructed using the T-population (Tifrunner × GT-C20) with 239 mapped loci which was then improved to 378 marker loci. In the present study, genotyping data was generated for additional 45 loci and 40 marker loci were successfully integrated to the existing genetic map. The current saturated genetic map has now 418 marker loci distributed onto 20 linkage groups (LGs) spanning a total genetic map length of 1935.4 cM with map density of 5.3 cM per loci. The mapped marker loci per LG varied from 6 (B09) to 36 (A03 and A08) with the mean of 19 loci per LG. Of the total 418 mapped markers, 250 marker loci were mapped onto the 10 LGs of A sub-genome with a total map distance of 1041.6 cM and 4.45 cM inter marker distance while 168 marker loci onto the 10 LGs of B sub-genome with total map distance of 893.8 cM and 6.25 cM inter marker distance