Analysis of bisulfite sequenced data of hybrids and their parental lines 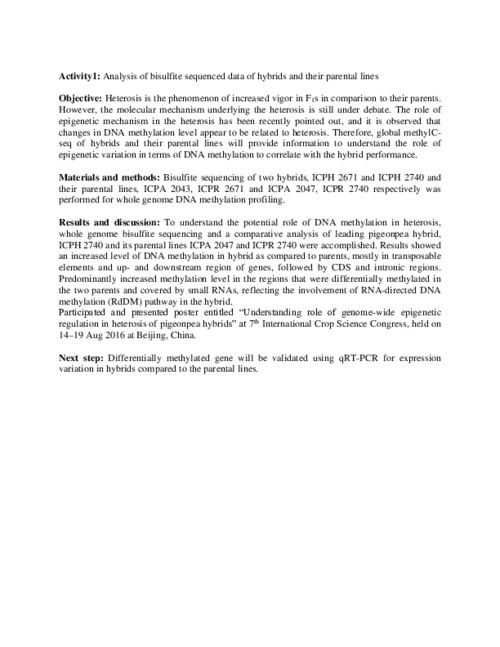 To understand the potential role of DNA methylation in heterosis, whole genome bisulfite sequencing and a comparative analysis of leading pigeonpea hybrid, ICPH 2740 and its parental lines ICPA 2047 and ICPR 2740 were accomplished. Results showed an increased level of DNA methylation in hybrid as compared to parents, mostly in transposable elements and up­ and downstream region of genes, followed by CDS and intronic regions. Predominantly increased methylation level in the regions that were differentially methylated in the two parents and covered by small RNAs, reflecting the involvement of RNA­directed DNA methylation (RdDM) pathway in the hybrid. Participated and presented poster entitled “Understanding role of genome-wide epigenetic regulation in heterosis of pigeonpea hybrids” at 7th International Crop Science Congress, held on 14–19 Aug 2016 at Beijing, China.