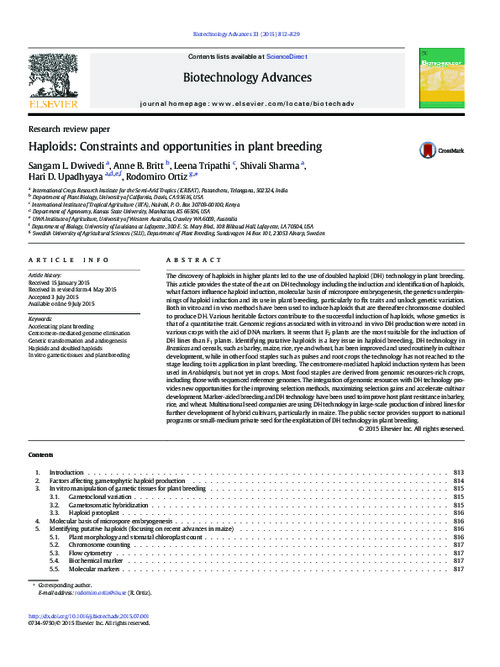 The discovery of haploids in higher plants led to the use of doubled haploid (DH) technology in plant breeding. This article provides the state of the art on DH technology including the induction and identification of haploids, what factors influence haploid induction, molecular basis of microspore embryogenesis, the genetics underpinnings of haploid induction and its use in plant breeding, particularly to fix traits and unlock genetic variation. Both in vitro and in vivo methods have been used to induce haploids that are thereafter chromosome doubled to produce DH. Various heritable factors contribute to the successful induction of haploids, whose genetics is that of a quantitative trait. Genomic regions associated with in vitro and in vivo DH production were noted in various crops with the aid of DNA markers. It seems that F2 plants are the most suitable for the induction of DH lines than F1 plants. Identifying putative haploids is a key issue in haploid breeding. DH technology in Brassicas and cereals, such as barley, maize, rice, rye and wheat, has been improved and used routinely in cultivar development, while in other food staples such as pulses and root crops the technology has not reached to the stage leading to its application in plant breeding. The centromere-mediated haploid induction system has been used in Arabidopsis, but not yet in crops. Most food staples are derived from genomic resources-rich crops, including those with sequenced reference genomes. The integration of genomic resources with DH technology provides new opportunities for the improving selection methods, maximizing selection gains and accelerate cultivar development. Marker-aided breeding and DH technology have been used to improve host plant resistance in barley, rice, and wheat. Multinational seed companies are using DH technology in large-scale production of inbred lines for further development of hybrid cultivars, particularly in maize. The public sector provides support to national programs or small-medium private seed for the exploitation of DH technology in plant breeding.