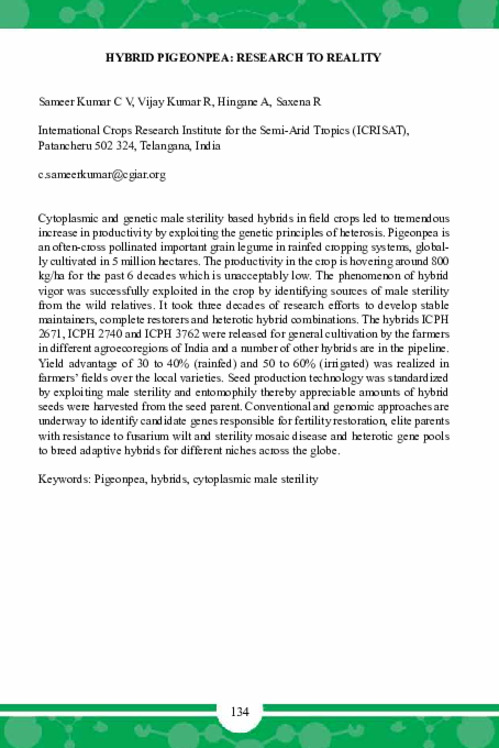 Cytoplasmic and genetic male sterility based hybrids in field crops led to tremendous increase in productivity by exploiting the genetic principles of heterosis. Pigeonpea is an oftencross pollinated important grain legume in rainfed cropping systems, globally cultivated in 5 million hectares. The productivity in the crop is hovering around 800 kg/ha for the past 6 decades which is unacceptably low. The phenomenon of hybrid vigor was successfully exploited in the crop by identifying sources of male sterility from the wild relatives. It took three decades of research efforts to develop stable maintainers, complete restorers and heterotic hybrid combinations. The hybrids ICPH 2671, ICPH 2740 and ICPH 3762 were released for general cultivation by the farmers in different agroecoregions of India and a number of other hybrids are in the pipeline. Yield advantage of 30 to 40% (rainfed) and 50 to 60% (irrigated) was realized in farmers’ fields over the local varieties. Seed production technology was standardized by exploiting male sterility and entomophily thereby appreciable amounts of hybrid seeds were harvested from the seed parent. Conventional and genomic approaches are underway to identify candidate genes responsible for fertility restoration, elite parents with resistance to fusarium wilt and sterility mosaic disease and heterotic gene pools to breed adaptive hybrids for different niches across the globe.