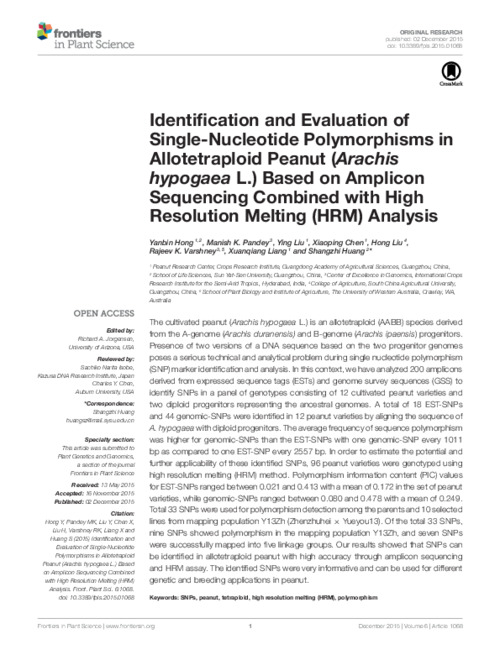 The cultivated peanut (Arachis hypogaea L.) is an allotetraploid (AABB) species derived from the A-genome (Arachis duranensis) and B-genome (Arachis ipaensis) progenitors. Presence of two versions of a DNA sequence based on the two progenitor genomes poses a serious technical and analytical problem during single nucleotide polymorphism (SNP) marker identification and analysis. In this context, we have analyzed 200 amplicons derived from expressed sequence tags (ESTs) and genome survey sequences (GSS) to identify SNPs in a panel of genotypes consisting of 12 cultivated peanut varieties and two diploid progenitors representing the ancestral genomes. A total of 18 EST-SNPs and 44 genomic-SNPs were identified in 12 peanut varieties by aligning the sequence of A. hypogaea with diploid progenitors. The average frequency of sequence polymorphism was higher for genomic-SNPs than the EST-SNPs with one genomic-SNP every 1011 bp as compared to one EST-SNP every 2557 bp. In order to estimate the potential and further applicability of these identified SNPs, 96 peanut varieties were genotyped using high resolution melting (HRM) method. Polymorphism information content (PIC) values for EST-SNPs ranged between 0.021 and 0.413 with a mean of 0.172 in the set of peanut varieties, while genomic-SNPs ranged between 0.080 and 0.478 with a mean of 0.249. Total 33 SNPs were used for polymorphism detection among the parents and 10 selected lines from mapping population Y13Zh (Zhenzhuhei × Yueyou13). Of the total 33 SNPs, nine SNPs showed polymorphism in the mapping population Y13Zh, and seven SNPs were successfully mapped into five linkage groups. Our results showed that SNPs can be identified in allotetraploid peanut with high accuracy through amplicon sequencing and HRM assay. The identified SNPs were very informative and can be used for different genetic and breeding applications in peanut.