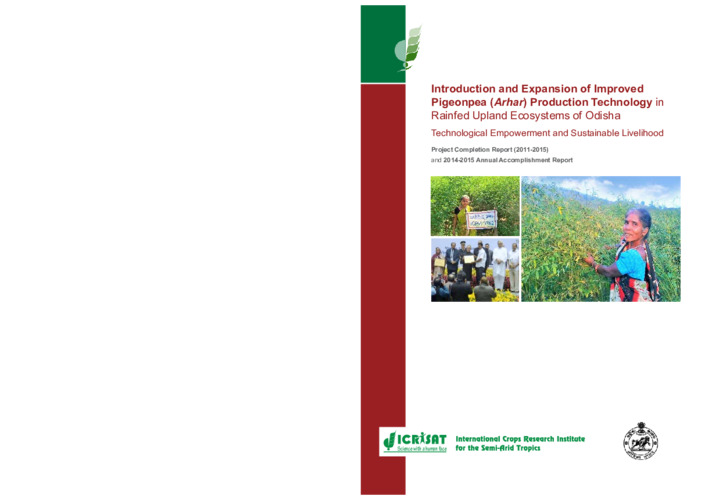 While 70% of the population lives in the rainfed upland ecosystem of Odisha, around 85% of the workforce depends on agriculture. There are about 8.7 million hectares of agricultural lands in the state of which 70% are rainfed. Production of pulses has been reduced to 56.4% of the total agricultural area, in the last ten years. The districts of Rayagada, Kalahandi, Boudh, Bolangir and Nuapada were identified by the project because of their dry and rainfed ecology. About 53,350 hectares of total tillable area is suitable for new high yielding pigeonpea varieties and hybrids in the five districts. The project intends to introduce and expand the production of high yielding pigeonpea varieties and hybrids by means of adaptation, selection and promotion through a farmer participatory approach. Pigeonpea is mainly grown in rainfed upland areas and is one of the most important pulse crops of the state. It is an affordable source of protein (22-24%) and contains carbohydrates, minerals and vitamins. Pigeonpea, which is also a good source of essential amino acids, can be an excellent crop to promote food and nutritional security in Odisha. However, its productivity is low in Odisha at 415 kg/ha compared to the national average of 700 kg/ha. It also has a very low seed replacement ratio of 2-3%. A large section of farmers in the rainfed upland ecosystems of Odisha have remained isolated from improved cultivars and management practices of pigeonpea for various reasons. There is ample scope for the expansion of high yielding short and medium duration pigeonpea varieties and hybrids in the rainfed areas for the development of sustainable livelihoods. It is mainly for these reasons that this project was implemented. The project ‘Introduction and Expansion of Improved Pigeonpea (Arhar) Production Technology in the Rainfed Upland Ecosystems of Odisha’ was funded by the Department of Agriculture and Food Production, Government of Odisha, India, through the Rashtriya Krishi Vikas Yojana (RKVY) sub-scheme 353 (No. 15(03)/19/2011). This was approved on 23 May 2011, for a period of 4 years from 2011 to 2015 with a total budget of Rs 10.288 crores (US$2.29 million). The project was officially launched on 09 August 2011 at ICRISAT, Patancheru, Telangana, India.