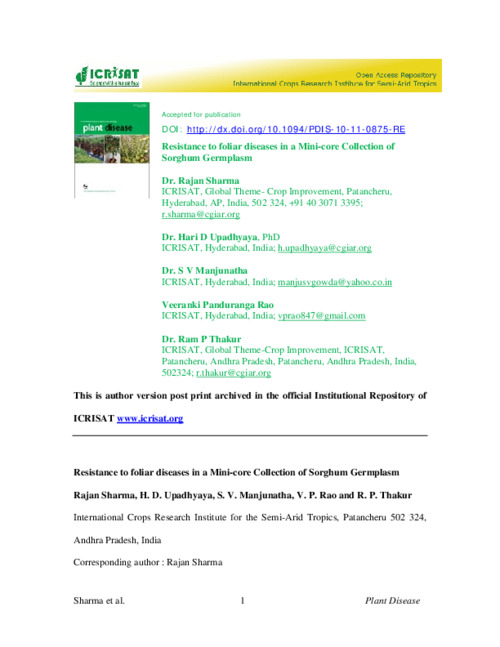 Anthracnose, leaf blight and rust are important biotic constraints to grain and forage sorghum production worldwide and are best managed through host plant resistance. A sorghum mini-core collection, consisting of 242 germplasm accessions developed from a core collection of 2,246 landrace accessions, originating from 58 countries, was evaluated to identify sources of resistance to foliar diseases. The mini-core accessions were evaluated in anthracnose and leaf blight screening nurseries under artificial inoculation in the rainy and late rainy seasons, respectively, during 2009 and 2010. For rust resistance, screening was done under artificial inoculation in the greenhouse as well as in the field under natural infection. Thirteen accessions were found resistant (score ≤3.0 on a 1 -9 scale) to anthracnose and 27 to leaf blight in both 2009 and 2010. Six accessions exhibited resistance to rust, both in the greenhouse and in the field. In the resistant accessions, a wide range of diversity was observed for agronomic traits such as days to 50% flowering, plant height and grain yield/plant, and morphological characters such as grain/glume color, glume coverage, endosperm texture and panicle type (ear head compactness). Three mini-core accessions (IS 473, IS 23684, and IS 23521) exhibited resistance to all three diseases. These accessions with multiple disease resistance will be useful in sorghum disease resistance breeding programs