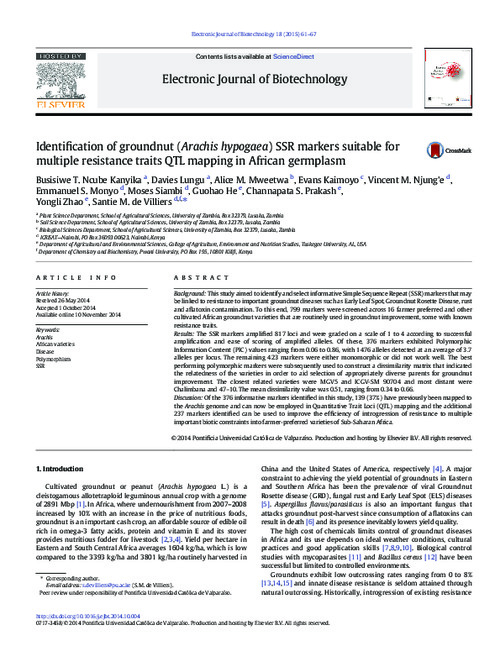 Background This study aimed to identify and select informative Simple Sequence Repeat (SSR) markers that may be linked to resistance to important groundnut diseases such as Early Leaf Spot, Groundnut Rosette Disease, rust and aflatoxin contamination. To this end, 799 markers were screened across 16 farmer preferred and other cultivated African groundnut varieties that are routinely used in groundnut improvement, some with known resistance traits. Results The SSR markers amplified 817 loci and were graded on a scale of 1 to 4 according to successful amplification and ease of scoring of amplified alleles. Of these, 376 markers exhibited Polymorphic Information Content (PIC) values ranging from 0.06 to 0.86, with 1476 alleles detected at an average of 3.7 alleles per locus. The remaining 423 markers were either monomorphic or did not work well. The best performing polymorphic markers were subsequently used to construct a dissimilarity matrix that indicated the relatedness of the varieties in order to aid selection of appropriately diverse parents for groundnut improvement. The closest related varieties were MGV5 and ICGV-SM 90704 and most distant were Chalimbana and 47–10. The mean dissimilarity value was 0.51, ranging from 0.34 to 0.66. Discussion Of the 376 informative markers identified in this study, 139 (37%) have previously been mapped to the Arachis genome and can now be employed in Quantitative Trait Loci (QTL) mapping and the additional 237 markers identified can be used to improve the efficiency of introgression of resistance to multiple important biotic constraints into farmer-preferred varieties of Sub-Saharan Africa.