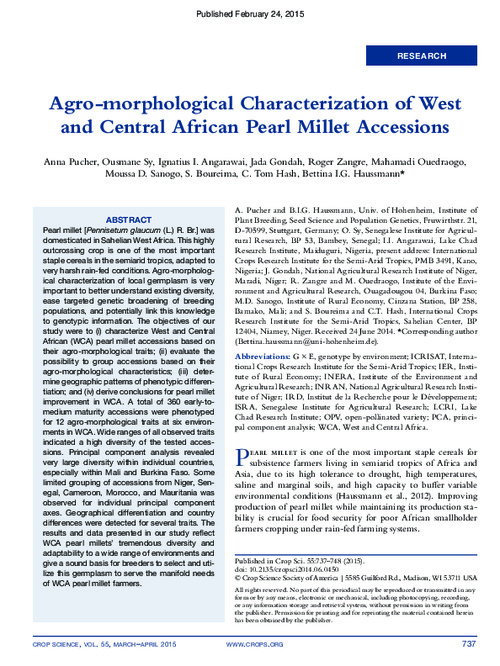 Pearl millet [Pennisetum glaucum (L.) R. Br.] was domesticated in Sahelian West Africa. This highly outcrossing crop is one of the most important staple cereals in the semiarid tropics, adapted to very harsh rain-fed conditions. Agro-morphological characterization of local germplasm is very important to better understand existing diversity, ease targeted genetic broadening of breeding populations, and potentially link this knowledge to genotypic information. The objectives of our study were to (i) characterize West and Central African (WCA) pearl millet accessions based on their agro-morphological traits; (ii) evaluate the possibility to group accessions based on their agro-morphological characteristics; (iii) determine geographic patterns of phenotypic differentiation; and (iv) derive conclusions for pearl millet improvement in WCA. A total of 360 early-tomedium maturity accessions were phenotyped for 12 agro-morphological traits at six environments in WCA.