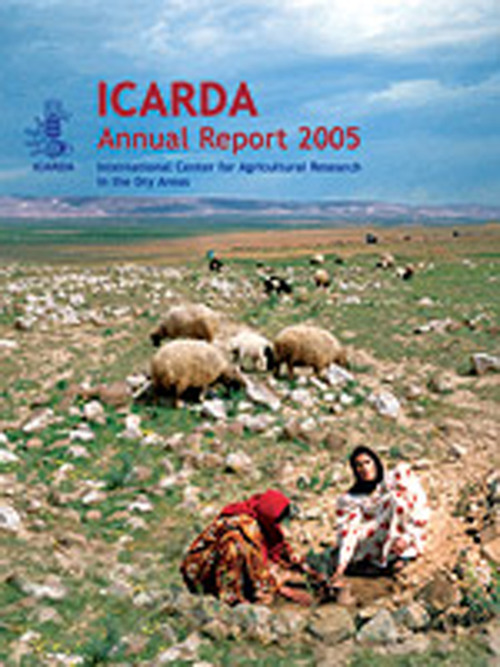 The year 2005 was an important milestone in the efforts of ICARDA and its partners in meeting the global challenges of agriculture in dry areas through the application of science. In an assessment of all 15 CGIAR Centers (based on science quality and relevance, impacts, partnerships, and financial and institutional health), conducted by the CGIAR in collaboration with the Science Council and the World Bank, ICARDA was rated outstanding" - one of only two centers to receive this rating. To maintain - and even exceed - this level of performance, the Center restructured its research portfolio in 2005. Ongoing research projects were carefully reviewed, and consolidated under six Mega-Projects, focusing on core issues: water management, crop improvement, desertification, crop-livestock systems, poverty and livelihoods, and knowledge dissemination. This consolidation, we believe, will optimize synergies, sharpen our poverty focus, and use the Center's collective skills and resources most effectively. Monitoring and evaluation is a continuous, ongoing process at ICARDA. Three Center-Commissioned External Reviews (CCER) took place during the year, focusing on specific areas: integrated gene management, natural resource management, and human capacity building. While the report on human capacity building had not been finalized at the time of going to press, the other two CCER reports were extremely positive. However, they did identify some opportunities for improvement; the Center has already begun taking the necessary action to respond to the recommendations of those reports. Improved varieties remain the backbone of agricultural development efforts. ICARDA's integrated, multi-disciplinary approach to plant breeding continued to pay rich dividends. In 2005, fifteen improved varieties of different crops (wheat, barley, chickpea, faba bean, lentil, forages) were released in countries within and beyond the CWANA (Central and West Asia and North Africa) region. ICARDA and the United Nations University, Japan, signed an agreement to launch a new South-South partnership to combat desertification. This global network on integrated natural resources management, named 'CWANA-Plus Partnership', will target the vast CWANA region, as well as large parts of China, South Asia, and sub-Saharan Africa. The objectives include sharing expertise and facilities, training developing-country scientists, expanding postgraduate degree programs in integrated land management, and promoting improved practices among small-scale farmers. ICARDA and CIMMYT, with a common interest in wheat improvement research, have long worked closely together. The two centers further strengthened their collaboration by establishing a joint ICARDA/CIMMYT Wheat Improvement Program for the CWANA region at ICARDA. A Director was appointed to lead the program. Also, the two centers, in partnership with national programs, launched a Global Rust Initiative (GRI) in September 2005 in response to a sudden, largescale outbreak of a new strain of wheat stem rust. Several countries in East Africa are affected; smallscale farmers in Kenya have lost as much as half their wheat harvest. The CWANA region stands at risk, so immediate action needs to be taken. The GRI embodies all that the CGIAR System stands for – expertise in strategic research, global partnerships, a focus on resource-poor smallholder farmers, and the ability and commitment to react swiftly to challenges. Nobel Laureate Dr Norman Borlaug, father of the Green Revolution, visited ICARDA headquarters in May 2005 and addressed the "CWANA Wheat Meeting", jointly organized by ICARDA and CIMMYT. The Center suffered a major blow when Dr Robert D. Havener – one of ICARDA's founding fathers and a mentor to many of our scientists – passed away in August 2005. His memory will continue to inspire us. The achievements of ICARDA and its partners presented in this Annual Report would not have been possible without the strong support of our onors. We thank them for their trust in ICARDA's work and for their continued support.