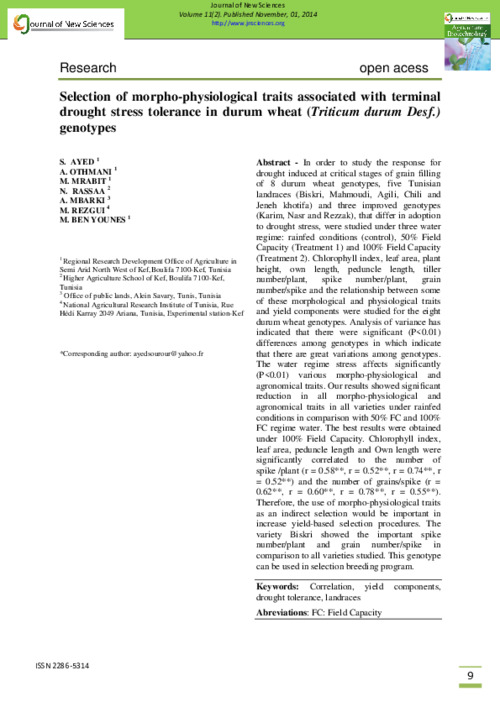 In order to study the response for drought induced at critical stages of grain filling of 8 durum wheat genotypes, five Tunisian landraces (Biskri, Mahmoudi, Agili, Chili and Jeneh khotifa) and three improved genotypes (Karim, Nasr and Rezzak), that differ in adoption to drought stress, were studied under three water regime: rainfed conditions (control), 50% Field Capacity (Treatment 1) and 100% Field Capacity (Treatment 2). Chlorophyll index, leaf area, plant height, own length, peduncle length, tiller number/plant, spike number/plant, grain number/spike and the relationship between some of these morphological and physiological traits and yield components were studied for the eight durum wheat genotypes. Analysis of variance has indicated that there were significant (P<0.01) differences among genotypes in which indicate that there are great variations among genotypes. The water regime stress affects significantly (P<0.01) various morpho-physiological and agronomical traits. Our results showed significant reduction in all morpho-physiological and agronomical traits in all varieties under rainfed conditions in comparison with 50% FC and 100% FC regime water. The best results were obtained under 100% Field Capacity. Chlorophyll index, leaf area, peduncle length and Own length were significantly correlated to the number of spike /plant (r = 0.58**, r = 0.52**, r = 0.74**, r = 0.52**) and the number of grains/spike (r = 0.62**, r = 0.60**, r = 0.78**, r = 0.55**). Therefore, the use of morpho-physiological traits as an indirect selection would be important in increase yield-based selection procedures. The variety Biskri showed the important spike number/plant and grain number/spike in comparison to all varieties studied. This genotype can be used in selection breeding program.