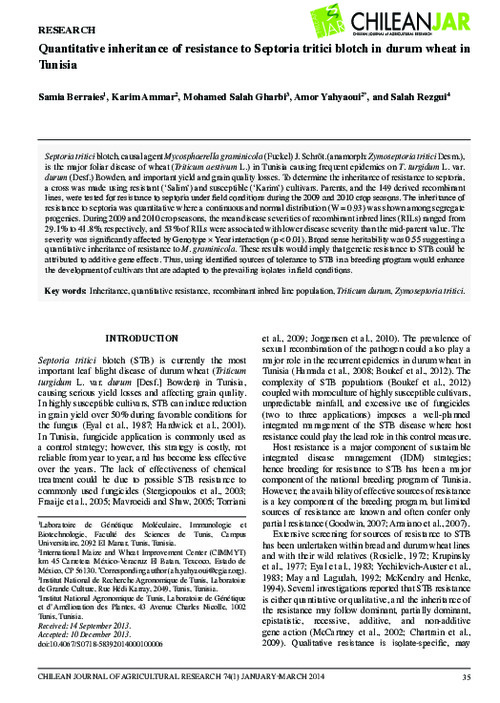 Septoria tritici blotch, causal agent Mycosphaerella graminicola (Fuckel) J. Schröt. (anamorph: Zymoseptoria tritici Desm.), is the major foliar disease of wheat (Triticum aestivum L.) in Tunisia causing frequent epidemics on T. turgidum L. var. durum (Desf.) Bowden, and important yield and grain quality losses. To determine the inheritance of resistance to septoria, a cross was made using resistant (‘Salim’) and susceptible (‘Karim’) cultivars. Parents, and the 149 derived recombinant lines, were tested for resistance to septoria under field conditions during the 2009 and 2010 crop seasons. The inheritance of resistance to septoria was quantitative where a continuous and normal distribution (W = 0.93) was shown among segregate progenies. During 2009 and 2010 crop seasons, the mean disease severities of recombinant inbred lines (RILs) ranged from 29.1% to 41.8%, respectively, and 53% of RILs were associated with lower disease severity than the mid-parent value. The severity was significantly affected by Genotype × Year interaction (p < 0.01). Broad sense heritability was 0.55 suggesting a quantitative inheritance of resistance to M. graminicola. These results would imply that genetic resistance to STB could be attributed to additive gene effects. Thus, using identified sources of tolerance to STB in a breeding program would enhance the development of cultivars that are adapted to the prevailing isolates in field conditions.