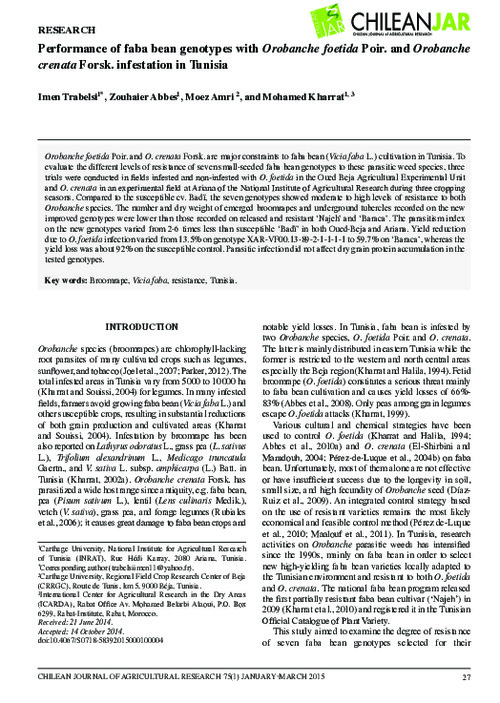 Orobanche foetida Poir. and O. crenata Forsk. are major constraints to faba bean (Vicia faba L.) cultivation in Tunisia. To evaluate the different levels of resistance of seven small-seeded faba bean genotypes to these parasitic weed species, three trials were conducted in fields infested and non-infested with O. foetida in the Oued Beja Agricultural Experimental Unit and O. crenata in an experimental field at Ariana of the National Institute of Agricultural Research during three cropping seasons. Compared to the susceptible cv. Badï, the seven genotypes showed moderate to high levels of resistance to both Orobanche species. The number and dry weight of emerged broomrapes and underground tubercles recorded on the new improved genotypes were lower than those recorded on released and resistant ‘Najeh’ and ‘Baraca’. The parasitism index on the new genotypes varied from 2-6 times less than susceptible ‘Badï’ in both Oued-Beja and Ariana. Yield reduction due to O. foetida infection varied from 13.5% on genotype XAR-VF00.13-89-2-1-1-1-1 to 59.7% on ‘Baraca’, whereas the yield loss was about 92% on the susceptible control. Parasitic infection did not affect dry grain protein accumulation in the tested genotypes