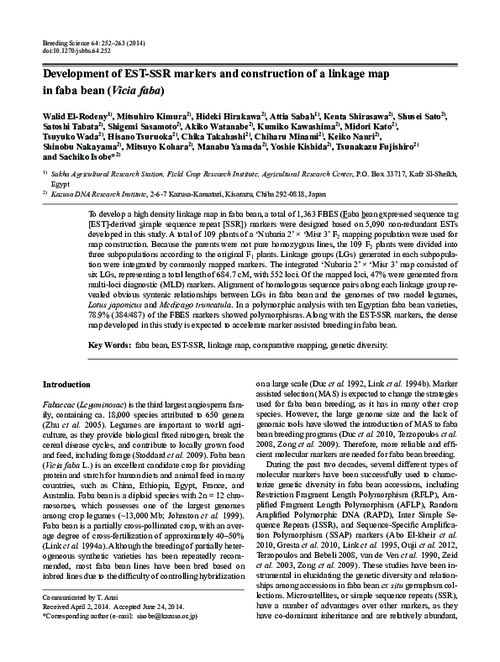 To develop a high density linkage map in faba bean, a total of 1,363 FBES (Faba bean expressed sequence tag [EST]­derived simple sequence repeat [SSR]) markers were designed based on 5,090 non-redundant ESTs developed in this study. A total of 109 plants of a ‘Nubaria 2’ × ‘Misr 3’ F2 mapping population were used for map construction. Because the parents were not pure homozygous lines, the 109 F2 plants were divided into three subpopulations according to the original F1 plants. Linkage groups (LGs) generated in each subpopulation were integrated by commonly mapped markers. The integrated ‘Nubaria 2’ × ‘Misr 3’ map consisted of six LGs, representing a total length of 684.7 cM, with 552 loci. Of the mapped loci, 47% were generated from multi-loci diagnostic (MLD) markers. Alignment of homologous sequence pairs along each linkage group revealed obvious syntenic relationships between LGs in faba bean and the genomes of two model legumes, Lotus japonicus and Medicago truncatula. In a polymorphic analysis with ten Egyptian faba bean varieties, 78.9% (384/487) of the FBES markers showed polymorphisms. Along with the EST-SSR markers, the dense map developed in this study is expected to accelerate marker assisted breeding in faba bean.