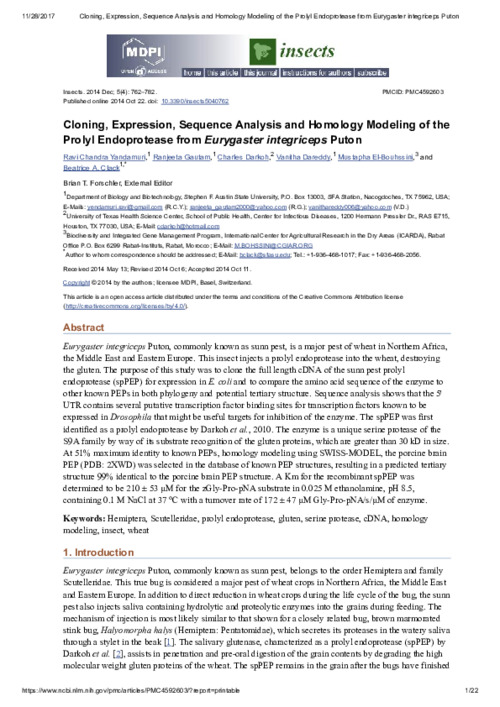 Eurygaster integriceps Puton, commonly known as sunn pest, is a major pest of wheat in Northern Africa, the Middle East and Eastern Europe. This insect injects a prolyl endoprotease into the wheat, destroying the gluten. The purpose of this study was to clone the full length cDNA of the sunn pest prolyl endoprotease (spPEP) for expression in E. coli and to compare the amino acid sequence of the enzyme to other known PEPs in both phylogeny and potential tertiary structure. Sequence analysis shows that the 5ꞌ UTR contains several putative transcription factor binding sites for transcription factors known to be expressed in Drosophila that might be useful targets for inhibition of the enzyme. The spPEP was first identified as a prolyl endoprotease by Darkoh et al., 2010. The enzyme is a unique serine protease of the S9A family by way of its substrate recognition of the gluten proteins, which are greater than 30 kD in size. At 51% maximum identity to known PEPs, homology modeling using SWISS-MODEL, the porcine brain PEP (PDB: 2XWD) was selected in the database of known PEP structures, resulting in a predicted tertiary structure 99% identical to the porcine brain PEP structure. A Km for the recombinant spPEP was determined to be 210 ± 53 µM for the zGly-Pro-pNA substrate in 0.025 M ethanolamine, pH 8.5, containing 0.1 M NaCl at 37 °C with a turnover rate of 172 ± 47 µM Gly-Pro-pNA/s/µM of enzyme.