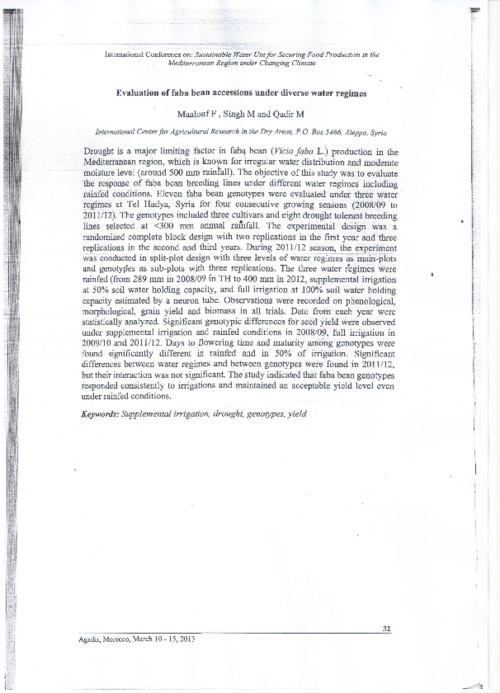 Drought is a major limiting factor in faba bean (Vicia faba L.) production in the Mediterranean region, which is known for irregular water distribution and moderate moisture level (around 500 mm rainfall). The objective of this study was to evaluate the response of faba bean breeding lines under different water regimes including rainfed conditions. Eleven faba bean genotypes were evaluated under three water ' regimes at Tel Hadya, Syria for four consecutive growing seasons (2008/09 to 2011112). The genotypes included three cultivars and eight drought tolerant breeding lines selected at <300 mm annual ra&'fall. The experimental design was a randomized complete block design with two replications in the fIrst year and three replications in the second and third years. During 2011/12 season, the experiment was conducted in split-plot design with three levels of water regimes asmaiO.-plots and genotypes as sub-plots with three replications. The three water regimes were rainfed (from 289 mm in 2008/09m TH to 400 mm in 2012, supplemental irrigation at 50% soil water holding capacity, and full irrigation at 100% soil water holding capacity estimated by a neuron tube. Observations were recorded on phenological, morphological, grain yield and biomass in all trials. Data from each year were statistically analyzed. SignifIcant genotypic differences for seed yield were observed under supplemental irrigation and rainfed conditions in 2008/09, full irrigation in 2009/10 and 2011112. Days to flowering time and maturity among genotypes were found signifIcantly different in rainfed and in 50% of irrigation. SignifIcant differences between water regimes and between genotypes were found in 2011112, but their interaction was not signifIcant. The study indicated that faba bean genotypes responded consistently to irrigations and maintained an acceptable yield level even under rainfed conditions.