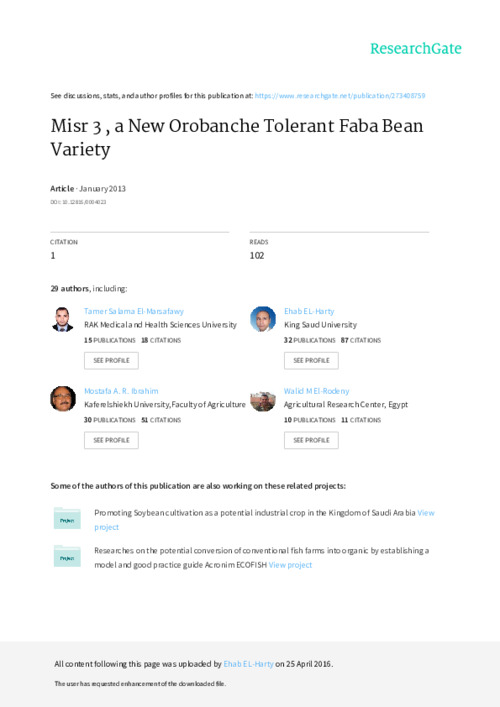 Ten promising Orobanche tolerant faba bean genotypes were evaluated with Misr 1 and Giza 843 (tolerant) and Giza 40 (susceptible) under free and highly Orobanche infested fields at Giza Research Station from 2005/06 to 2007/08 growing seasons. The same materials were evaluated under farmers’ fields in Behera and Sharkia Governorates during 2008/09 season under free and natural infested soils. Demonstration plots were conducted at Behera and Sharkia in Orobanche heavy infested farmers’ fields to demonstrate to the farmers the level of resistance in the new tolerant genotype. At Giza Research Station, the promising genotype X-1722 exceeded the other genotypes by an average of 2-80 % for seed yield/plant. For seed yield /fed. results indicated that X-1722, X-1714 and Misr 1 could be considered tolerant to Orobanche compared with the susceptible check. In on farm trials, X-1722 seed yield exceeded Misr 1 and Giza 843 by 4 and 30%. The promising X-1722 seed yield exceeded the recommended tolerant cultivar Giza 843 by 19.5– 31.5% at Sharkia and by 26.2– 34.0% at Behera in season 2011, and has been released as a new variety in 2011 season with the name of Misr 3.