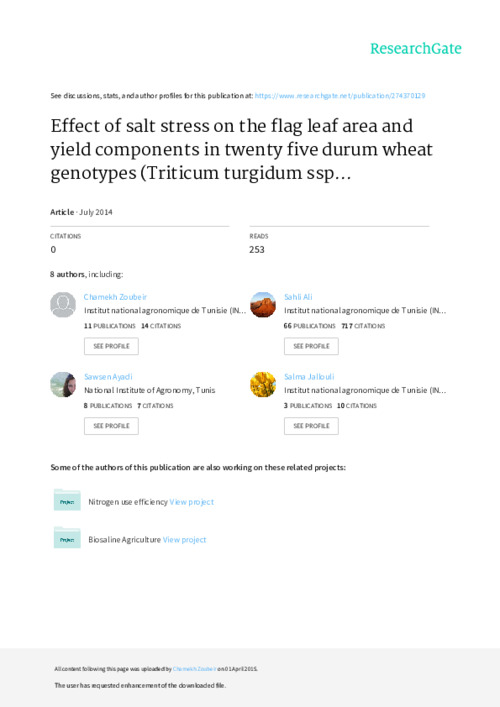 Salt stress is considered to be a major limiting factor for plant growth and crop productivity. In this study, effect of salinity on leaf area, ion accumulation (Na+, K+) and component yield (grain number per spike, 1000 grain weight, number of spikes per m² and grain yield) were investigated in twenty five genotypes of durum wheat (Triticum turgidum ssp. durum) cultivated in three different regions in Tunisia center (Echbika, Barrouta and Sidi Bouzide). These sites differ by their salinity degree in the irrigation water respectively 2.1 (control), 4.3 and 5.2 g/l. As a result salt stress the flag leaf area decreased significantly for the most of genotypes with the increase of stress treatments except “Mahmoudi, Om Rabia, N, Maali, Khiar and Jneh Khotifa”. Na+ concentrations increased with increase in salinity but K+ concentration was lower as salinity levels increased for all cultivars expect “Mahmoudi” and “Hamira” cultivars. Thus, less Na+ accumulation and more K+ content in these genotypes at the highest salt level, confirm salt tolerance of these cultivars. Grain number per spike, 1000 grain weight, number of spikes per m² and grain yield showed a reduction with increase in root zone Stalinization but the effect was varied in different durum wheat genotypes. It was concluded that the conservation of the leaf area and a low concentration of Na+ in the flag leaf will improve the salt tolerance of wheat genotypes in breeding programs.