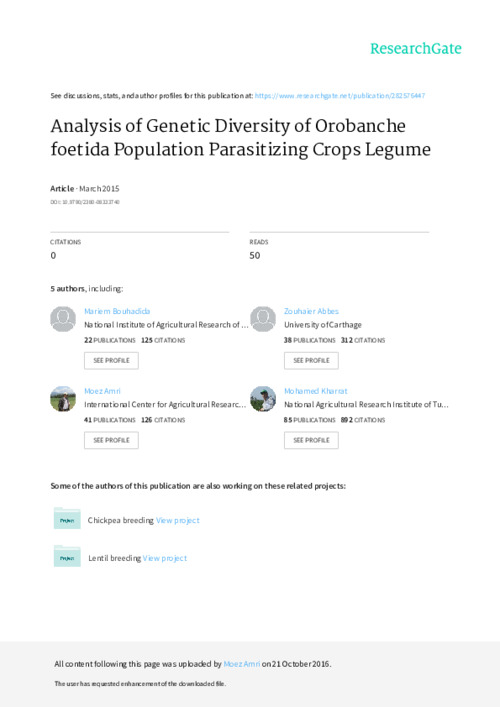 Broomrape (Orobanche foetida Poir.) is an holoparasite that attacks crop legumes in Tunisia mainly faba bean which limits seriously crop cultivation and causes severe damage in several important regions of the North-West of the country. The use of molecular markers may give good appreciation of genetic diversity in parasite populations. For this purpose, 35 specimens of O. foetida representing five populations collected respectively on Vicia faba, Cicer arietinum, Medicago scutellata, Vicia sativa and Vicia narbonensis were studied. Analysis of the genetic variability was assessed through the use of 10 RAPD markers. Among the markers used, 7 provided good electrophoretic profiles therefore they were selected for the analysis of genetic diversity of the broomrape samples studied. A total of 75 alleles were detected at the seven RAPD regions with an average of 10.71 alleles per locus. The dendrogram obtained using the Dice coefficient allowed us to distinguish unambiguously all the specimens of O. foetida studied except 2 which belong to the same parasite population infesting common vetch (Vicia sativa). Significant genetic differentiation among O. foetida populations was detected; diversity was attributed to differences among individuals within populations and among populations. The need of availability of good markers which could give a higher degree of resolution for discriminating closely related germplasm, could be useful to better understand the structure of populations and to well identify parasitic groups.