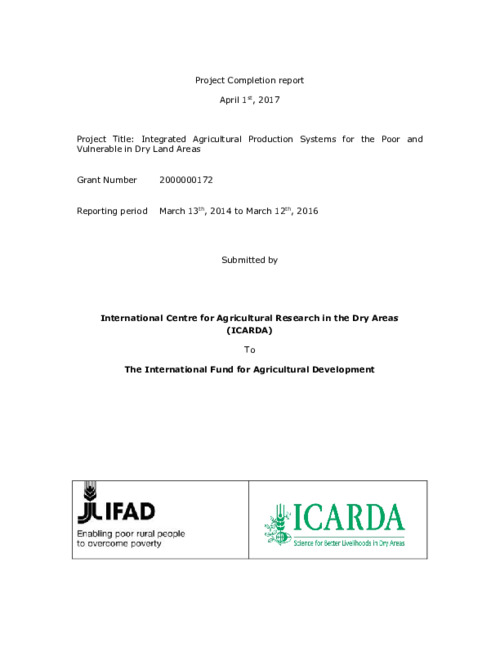 This technical report is a synthesis of activities undertaken between March 13th, 2014 and March 12th, 2016. Countries of engagement for this initiative were Egypt, Eritrea, Ethiopia, Kenya, Sudan and Yemen. As of March 12th, 2016, $539,471 of the allocated $1,470,000 remained underutilized, with over half of this amount relating to unspent staff costs for ICARDA social scientist engagement. Prior to project closure, a request for no-cost extension was submitted by the International Centre for Agricultural Research in the Dry Areas (ICARDA) to IFAD. The argument for an extension at no-cost was based on delays in implementing activities at project inception, given a mutual decision between IFAD and ICARDA to first undertake a synthesis of an earlier phase of this initiative; and thereby identifying specific value chains for focus within this second phase. Based on discussions over the week of March 6th, 2017, and considering the closure of the IFAD AR4D Support for Dry Lands in January 2017, ICARDA was advised that a no-cost extension could not be entertained. Over the one-year period since the application for a no-cost extension, country partners have continued, and are continuing, to push forward on many activities initiated under this project – through their own volition and with their own (nonproject) resources. A synthesis of this work, post March 6th 2016, is not captured within this report. As such, a proposal has been offered to hold a workshop cum write-shop over the week of May 13th, 2017 aimed at capturing learning, synthesize project lessons learned; and to document success stories, challenges and recommendations for efficacy in future undertakings. If accepted, a revision to this report will be submitted and one that is inclusive of learnings documented from the proposed workshop cum write-shop.