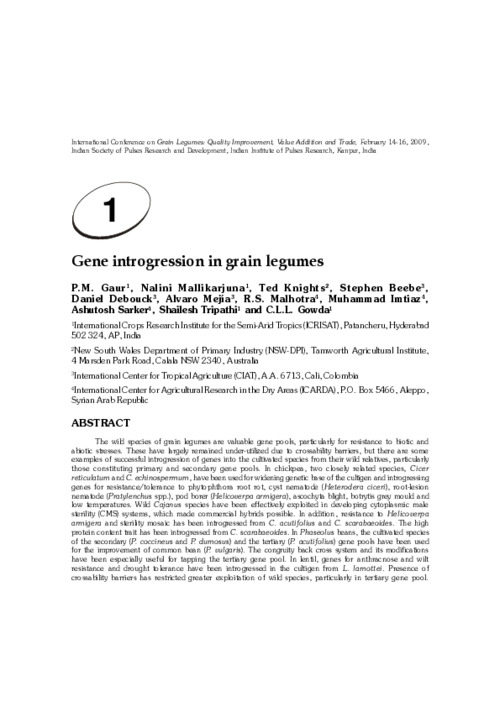 The wild species of grain legumes are valuable gene pools, particularly for resistance to biotic and abiotic stresses. These have largely remained under-utilized due to crossability barriers, but there are some examples of successful introgression of genes into the cultivated species from their wild relatives, particularly those constituting primary and secondary gene pools. In chickpea, two closely related species, Cicer reticulatum and C. echinospermum, have been used for widening genetic base of the cultigen and introgressing genes for resistance/tolerance to phytophthora root rot, cyst nematode (Heterodera ciceri), root-lesion nematode (Pratylenchus spp.), pod borer (Helicoverpa armigera), ascochyta blight, botrytis grey mould and low temperatures. Wild Cajanus species have been effectively exploited in developing cytoplasmic male sterility (CMS) systems, which made commercial hybrids possible. In addition, resistance to Helicoverpa armigera and sterility mosaic has been introgressed from C. acutifolius and C. scarabaeoides. The high protein content trait has been introgressed from C. scarabaeoides. In Phaseolus beans, the cultivated species of the secondary (P. coccineus and P. dumosus) and the tertiary (P. acutifolius) gene pools have been used for the improvement of common bean (P. vulgaris). The congruity back cross system and its modifications have been especially useful for tapping the tertiary gene pool. In lentil, genes for anthracnose and wilt resistance and drought tolerance have been introgressed in the cultigen from L. lamottei. Presence of crossability barriers has restricted greater exploitation of wild species, particularly in tertiary gene pool. Concerted efforts are needed to overcome these crossability barriers. Cloning of desired genes from crossing compatible wild species and their transfer through transgenic approaches may also be considered.