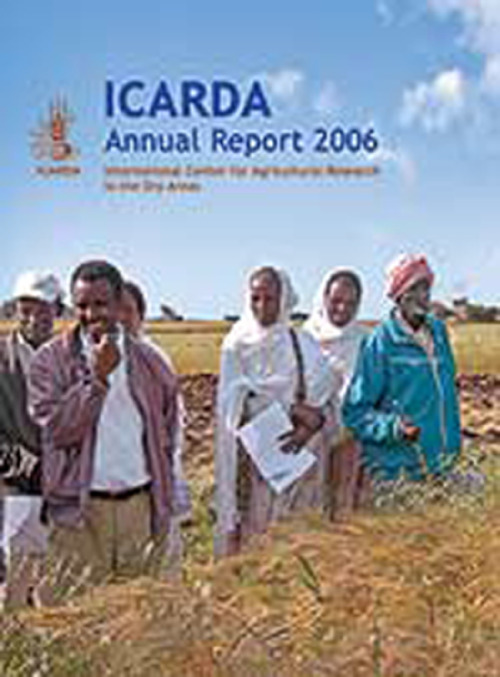 ICARDA witnessed several important developments in 2006. Of these, the Fifth External Program and Management Review (EPMR) was the most significant, as it provided a comprehensive assessment of the Center's global activities, as well as new insights and dimensions that helped refine ICARDA's new Strategic Plan for 2007- 2016. The EPMR coincided with a transition in the governance and leadership of ICARDA. Against the backdrop of the EPMR recommendations, the staff, management and Board of Trustees took a fresh look at the Center's achievements and lessons learned since it was established. Areas in need of strategic realignment were identified to reposition ICARDA to meet the emerging challenges driven by climate variability and change, population growth, globalization, and other factors in dry areas. The EPMR report highlighted the very positive feedback from ICARDA's stakeholders, commended the quality and relevance of the Center's research, the sound financial management, the strength of regional programs, the Center's strong relationships with NARS partners; and acknowledged that ICARDA activities have had significant impact on improving agricultural productivity and livelihoods in the dry areas. Implementation of the EPMR recommendations started in 2006. During the year, ICARDA continued to make rapid strides in its research and training activities. The Center ranked "Superior" in the CGIAR Annual Performance Measurement for 2006, based on a set of performance indicators, and was highest among the 15 sister centers for its commitment to documenting impacts and building an impact assessment culture of its research. Eighteen improved varieties of wheat, barley, chickpea, lentil, grass pea and faba bean, developed jointly by NARS-ICARDA teams from ICARDA-generated germplasm material, were released in 11 countries. Adoption of the varieties released earlier, and of improved technologies for water, land and livestock management, continued to increase and was documented through socioeconomic and impact studies. New, strategic partnerships were forged to increase ICARDA's efforts on crop diversification, particularly highvalue crops and value-added crop and livestock products. In this context, studies on characterization of indigenous small-ruminant breeds were published to help national researchers exploit the genetic potential of different breeds available in the region. Work at the water benchmark sites, aimed at improving water-use efficiency, made substantial progress in bringing local communities, policy makers and national researchers together: the number of farmers using microcatchment water harvesting systems to capture rainfall in the steppe areas of Jordan has tripled; the terracedfurrows system, which uses 30% less water, gained popularity in the irrigated benchmark area in Egypt; and early sowing and supplemental irrigation attracted increased farmer attention in the rainfed benchmark area in Morocco. In order to leverage its international presence and encourage wider dissemination of the International Public Goods produced through its research, ICARDA scaled up its participation in various international conventions, particularly the United Nations Convention to Combat Desertification (UNCCD). ICARDA, together with ICRISAT, continued to lead the Oasis Consortium to combat desertification, working with nine other CGIAR Centers and a number of national governments, research centers and other partners. Among several initiatives of the Center to contribute to the "International Year of Deserts," the most significant was an international conference, which ICARDA co-sponsored with the International Drylands Development Commission, Chinese Academy of Sciences, United Nations University, Tokyo, and other partners. The conference was held in Beijing, China, in February 2006. The Center continued to contribute to the rebuilding of agricultural research and human resources expertise in countries affected by war and conflict in the region, particularly Afghanistan, Iraq and the Palestinian Authority. Donor support for these efforts continued to be strong, enabling the Center and its partners to scale up their efforts, with great success in strengthening agricultural research capacity to support national economic development. ICARDA is indebted to Dr Margaret Catley-Carlson and Prof. Dr Adel El-Beltagy, who held the office of the Board Chair and Director General, respectively, until 7 May 2006, for their vision and able governance and leadership of the Center. Their contributions to the growth and development of ICARDA are gratefully acknowledged. The achievements reported in this Annual Report would not have been possible without the generous support of a large number of donors to the Center (listed in Appendix 7). ICARDA is grateful to all of them. The Center looks forward to continue working with a sharper focus on alleviating poverty and protecting the natural resource base, using modern tools of science, in collaboration with its partners in dry areas globally.