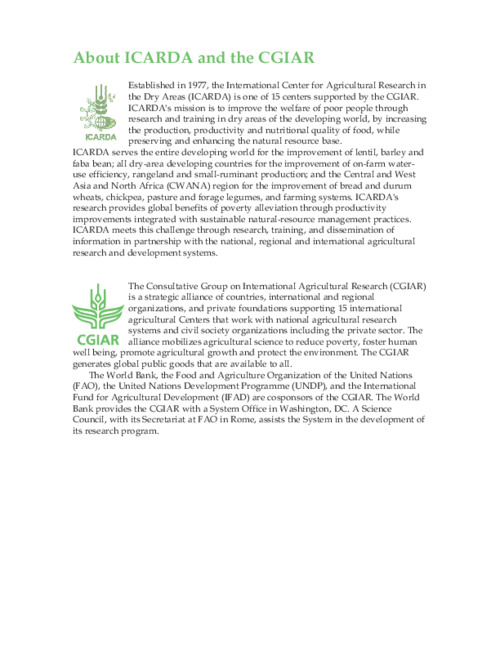 In 2004, ICARDA began strategic visioning, driven by the global focus on achieving the Millennium Development Goals and the realignment of the CGIAR System priorities by the Science Council. It involved, among other actions, a consolidation of the 19 research projects into six mega-projects for better integration of the Center’s multidisciplinary teams, and an increased use of new tools of science in addressing the problems of poverty and degradation of natural resources. The new, poverty-focused research portfolio, scheduled to be implemented from 1 January 2005, encompasses a number of new avenues including improved income generation from high-value crops and adding value to staple crop and livestock products; rehabilitating agriculture in countries affected by conflict; and closer alignment of agricultural research with mainstream development programs through research-for development applications. Implementation of research projects under the Challenge Program on Water and Food got off to a good start, with activities in Eritrea on barley improvement and in the Kerkheh river basin in Iran on water productivity. In addition, ICARDA continued to play a leading role in international fora on issues related to the development of agriculture in dry areas. Working with ICARDA, at least 13 countries released more than 35 improved cereal and food and feed legume varieties in 2004. The key traits of the improved varieties include better yields, resistance to pests and diseases, and tolerance to cold and drought. ICARDA continued its work to rebuild agricultural systems in Afghanistan. During the year, under the Research in Alternative Livelihoods Fund (RALF) projects, supported by DFID (Department for International Development, UK), the Center started work on developing and promoting innovative alternative livelihood options for rural Afghans who are currently economically dependent on opium poppy. The Center also strengthened its activities on technology transfer, established village-based seed enterprises, and introduced protected agriculture in Afghanistan under the Rebuilding Agricultural Markets in Afghanistan (RAMP) program, funded by the United States Agency for International Development (USAID). The Center was privileged to host the inaugural meeting of the CGIAR Science Council, and the annual meetings of the CGIAR Center Board Chairs Committee (CBC), and Center Directors Committee (CDC) in May 2004. ICARDA enters 2005 with a sharpened focus on contributing to the Millennium Development Goals, especially halving poverty and hunger by 2015. The Center’s Board of Trustees, Management and Staff thank all of ICARDA’s donors and partners for their continued support, without which the activities and achievements summarized in this Annual Report would not have been possible.