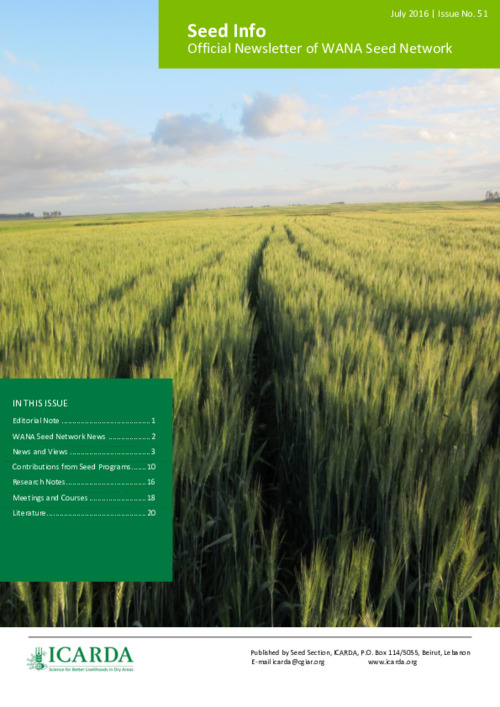 Seed Info aims to stimulate information exchange and regular communication among seed staff in the Central and West Asia and North Africa (CWANA) region and beyond. Its purpose is to help strengthen national seed programs and thus improve the supply of high-quality seed to farmers. The WANA Seed Network News provides information on activities relating to global and/or regional cooperation and collaboration to facilitate the development of a vibrant regional seed industry. In this issue of Seed Info, we report on the regional seed courses organized by the International Center for Agricultural Research in the Dry Areas (ICARDA). In the News and Views section, Niels Louwaars from the Dutch Seed Association writes about Remembering Mendel’s Legacy. This year is exactly 150 years since Gregor Mendel published his theories on inheritance. After many years of crossing and observing peas, he found that plant characters were located in the gametes – in pollen and egg cells, and that the combination of the two determined the expression of such characteristics. It took 34 years until these findings became known in the scientific community. Mendel’s ideas quickly spread and were put into practice giving the theoretical basis and the birth of modern plant breeding. Since then, plant breeding has made major achievements and progress in quantitative genetics, use of hybrid vigor, mutation breeding, and transgenics. Other news in this section comes from Iran and Morocco as well as regional and/or international organizations, such as the African Seed Trade Association (AFSTA), the International Seed Federation (ISF), the International Seed Testing Association (ISTA), and the International Union for the Protection of New Varieties of Plants (UPOV). Iran expanded its membership in the OECD Seed Scheme joining the cereals and maize and sorghum schemes, with the potential to enter international seed trade. The OECD Schemes for the Varietal Certification of Seed Moving in International Trade promote the use of agriculture seed of consistently high quality. Certified seeds are produced, and officially controlled, according to common harmonized procedures in 58 participating countries. The section on Seed Programs presents news from Ethiopia, Iran and Pakistan. Ethiopia reports on the release of new improved varieties of barley and chickpea by national agricultural research systems from the productive partnerships with ICARDA. Ethiopia continues with its successful chickpea revolution, releasing new improved varieties with high yield potential and resistance to major biotic stresses such as wilt/root rot complex and ascochyta blight. Ethiopia is also a major producer of barley in sub-Saharan Africa, and new malt barley varieties with high potential and better malt quality were released by the Ethiopian Institute of Agricultural Research (EIAR). The report also includes the pilot electronic field inspection system introduced in Iran. Reviewing the successful implementation of the electronic field inspection system, has led to the decision to expand it to crops other than wheat and barley. The Research section of Seed Info captures information on adaptive research or issues relevant to developing seed programs in the CWANA region and beyond. This issue features an article Identification of Durum Wheat Varieties in Southeastern Ethiopia by Yetsedaw et al. from ICARDA, Ethiopia. The paper discusses the participatory variety selection of durum wheat varieties carried out at Africa Rising project sites in the Bale Zone of southeastern Ethiopia. Participatory varietal selection, both by female and male farmers, identified high-yielding durum wheat cultivars that were well adapted and preferred by farmers. The activities are coupled with local seed production by organizing farmer groups to ensure scaling out of the new varieties.