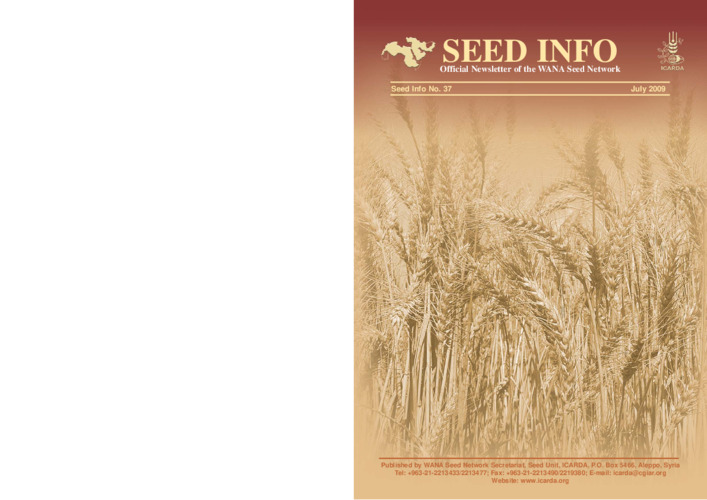 Seed Info aims to stimulate information exchange and regular communication among seed staff in the Central and West Asia and North Africa (CWANA) region. The purpose is to help strengthen national seed programs, and thus improve the supply of quality seed to farmers. Formal seed system requires mandatory varietal and seed certification, where seed production fields are inspected and seed lots are tested for quality, for the commercialization of certified seed. Such mandatory system requires huge investment, and many developing countries lack the physical, financial and human resources for implementing such comprehensive certification schemes. In the 1980s, The FAO proposed an alternative seed certification scheme called Quality Declared Seed (QDS) to replace stringent and costly mandatory certification schemes. Above all, the QDS system proposed realistic and achievable field and seed standards; and shifted the responsibility for seed quality from certification agencies to seed producers. In the NEWS AND VIEWS section Britt Granqvist from= BriAgri ApS Consultancy Company in Denmark provides readers with the practical advantages of introducing and implementing a QDS system for local seed production and marketing by small-scale farmers, taking into consideration the experiences of Tanzania. There is also news on the AFSTA Seed Congress 2009 in South Africa, and the World Seed Congress in Antalya, Turkey, the establishment of an investment fund for African seed companies by AGRA and AAC and the global growth and adoption of biotech crops. The Alliance for a Green Revolution in Africa (AGRA) and the African Agriculture Capital (AAC), a venture capital investment fund that invests in several small African seed companies, launched the African Seed Investment Fund (ASIF). The first fund of its kind in the continent, ASIF will invest in at least 20 small- and medium-size seed companies in Southern and Eastern Africa over the next five years. The fund will operate in eight countries: Ethiopia, Kenya, Malawi Mozambique, Rwanda, Tanzania, Uganda and Zambia. According to the International Service for Acquisition of Agri-biotech Applications (ISAAA), consistent and substantial economic, environmental and welfare benefits offered by biotech crops, led millions of small and resource-poor farmers around the world to continue planting more hectares of biotech crops in 2008, the thirteenth year of commercialization. ISAAA reported that the global area of biotech crops has reached a record 125 million ha in 2008, from 114 million ha in 2007. About 13.3 million farmers planted biotech crops in 2008 in 25 countries (10 developed and 15 developing countries), up from 1.3 million in 2007. Bolivia become the ninth country in Latin America to adopt biotech crops in 2007, while Burkina Faso in Africa began planting biotech cotton, and Egypt planted biotech maize for the first time in 2008. The section on SEED PROGRAMS includes news from Afghanistan, Egypt, Ethiopia, Pakistan and Turkey. The news from Afghanistan focuses on the wheat varietal releases by the FAO-EU Seed Project. We are also reporting on the efforts of ICARDA and CIMMYT in developing stem rust resistant varieties and accelerated seed multiplication in selected countries including Afghanistan, Bangladesh, Egypt, Ethiopia, Nepal and Pakistan. The RESEARCH section aims to capture information on adaptive research or issues relevant to seed program development in the region and beyond. In the present issue, however, we feature an article entitled Knowledge and Innovation for Agricultural Development prepared by Kwadwo Asenso-Okyere and Kristin Davis from IFPRI. The article provides an insight from knowledge generation to key policy options for promoting knowledge and innovation for agricultural development. Seed Info encourages the exchange of information in the national, regional, and global seed industry.