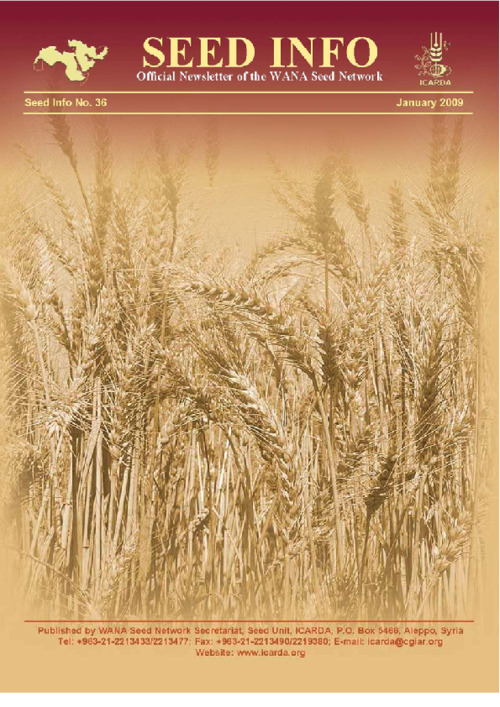 Seed Info aims to stimulate information exchange and regular communication among seed staff in the Central and West Asia and North Africa (CWANA) region. The purpose is to help strengthen national seed programs, and thus improve the supply of quality seed to farmers. The first International Seed Congress, which led to the establishment of the International Seed Trade Federation (FIS= Fédération Internationale du Commerce des Semences) was held in London in 1924. Later on the International Association of Plant Breeders for the Protection of Plant Varieties (ASSINSEL=Association Internationale des Sélectionneurs pour la Protection de Obentions Végétales) was established in 1938. FIS and ASSINSEL run as separate association, but merged in 2002 to become the International Seed Federation (ISF). In the NEWS AND VIEWS section Marcel Bruins, Secretary General of ISF, provides readers with an insight looking into the role of seed association in the national, regional and global seed industry taking into considerations the roles of ISF and affiliated associations in Africa, Americas, Asia and Europe. There is also news on the Program for Africa’s Seed Systems (PASS) from Agricultural Green Revolution for Africa (AGRA), commercialization of the first CMS pigeon pea hybrid from ICRISAT and seed sales of dedicated energy. PASS is a new venture whose mission is to increase income, improve food security, and reduces poverty by promoting the development of a seed system that delivers new crop technology to farmers in an efficient, equitable, and sustainable manner. PASS prioritizes getting funds to key individuals and agencies working directly with Africa’s farmers on developing new crop varieties, producing new seeds, and developing new delivery systems for getting critical inputs to smallholder farmers. PASS is funding the development of new varieties of beans, cassava, cowpea, maize, rice, sweet potato and sorghum in several African (13) countries. Pigeon pea is an important pulse crop and grows on 3.5 million ha in India alone. It is particularly very suitable for rainfed agriculture because of its drought tolerance, minimum input requirements and producing reasonable yields under unfavorable agro-ecological conditions. In the past 50 years, however, pigeon pea productivity has not increased in spite of several new varieties being released. To achieve a breakthrough in yield, ICRISAT used innovative breeding technology to develop commercial hybrids, the first in food legume working with the Indian Council of Agricultural Research, State agricultural universities, state seed corporations and private seed companies. After 25 years of research, the first pigeon pea hybrid ICPH 2671 was developed by ICRISAT in 2005 and commercialized by Pravardhan Seeds. The section on SEED PROGRAMS includes news from Afghanistan, Egypt and Ethiopia. The news from Afghanistan focuses on the First General Assembly of Afghanistan National Seed Organization held in Badam Bagh, Kabul on 19 October 2008. We are also reporting on the existing or emerging seed trade associations, representing the interests of the private seed sector in the face of changing policy and regulatory frameworks in Egypt and Ethiopia. The RESEARCH section aims to capture information on adaptive research or issues relevant to seed program development in the region and beyond. Alemayehu et al from the Southern Agricultural Research Institute writes about the bean seed system in southern in Ethiopia with emphasis on the role of farmers and social institutions. Seed Info encourages the exchange of information on the national, regional, and global seed industry.