Assessment of land degradation processes in the northwestern Ethiopian Highlands 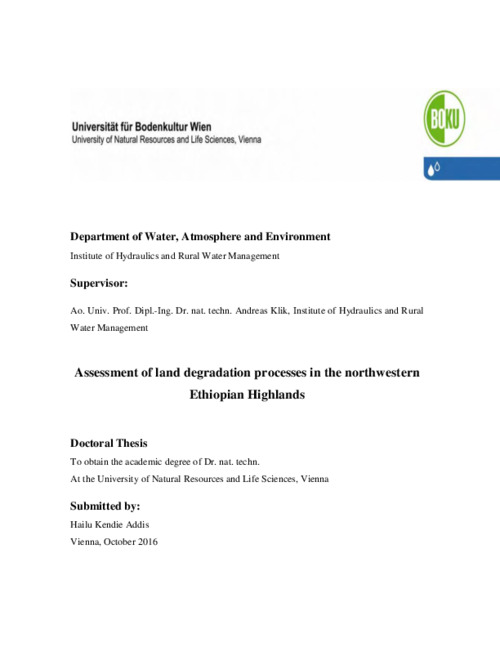 Soil erosion in the northwestern Amhara region, Ethiopia has been a subject of anxiety, resulting in a major environmental threat to the sustainability and productive capacity of agricultural areas. In the present thesis, selected soil properties, hydrological and sediment dynamics were assessed for a watershed, while predicting the spatial distribution of soil properties was also done. The 53.7 km2 Gumara-Maksegnit watershed was divided into a 500 m by 500 m grid to sample bulk density (ρd), pH, soil organic carbon (SOC), total nitrogen (TN), available phosphorus (AP) and texture of topsoil (roughly 10 to 25 cm depth). Such properties were investigated with respect to the two main land-uses (forest and agriculture) and three different slope steepness classes, 0–10 (%), 10–30 (%), >30 (%). The result indicated higher SOC, TN, silt and sand content in forest soils compared to agricultural soils, while ρd is lower in the forest soil. Overall an increase of SOC, TN, silt and sand content from gentle to steep slopes have been observed for both land-uses. In contrast, clay content and ρd seem to increase from steep to gentle slopes on agricultural areas, which might be due to accumulation of particularly fine soil particles eroded from the steep areas. In the second part, the performance of ordinary kriging (OK), inverse distance weighting (IDW) and radial basis functions (RBF) for predicting the spatial distribution of soil texture, pH, soil organic carbon (SOC) and available phosphorus (AP) were done. The performance of each interpolation method was assessed quantitatively in terms of NashSutcliffe efficiency (E), coefficient of determination (R2 ) and index of agreement (d). The interpolated maps generated based on the highest value of E displayed OK was best performed for SOC and sand. RBF was most suitable for mapping of AP and clay, while IDW gave better result when applied to pH. Overall, the cross-validation statistics for each interpolation method showed there was no single method that significantly outperformed the others. Therefore, one of the interpolation methods could be applied for surfaces map generation in future studies of similar regions. In the third part, the Soil and Water Assessment Tool (SWAT) model was used to model hydrology and sediment dynamics of the watershed. Spatially distributed stone bund impacts were applied in the model through modification of the surface runoff ratio and adjustment of a support practice factor simulating the trapped amounts of water and sediment at the SWC structure and watershed level. The resulting Nash-Sutcliffe efficiency (NSE) for daily streamflow simulation was 0.56 for the calibration and 0.48 for the validation period, suggesting satisfactory model performance. In contrast, the daily sediment simulation resulted in unsatisfactory model performance, with the NSE value of 0.07 for the calibration and –1.76 for the validation period and this could be as a result of high intensity and short duration rainfall events in the watershed. Meanwhile, the calibrated model indicated 21.08 Mg ha-1 average annual sediment yield, which is far beyond potential soil regeneration rate.