Groundwater use - assessment and options in a dry region of Syria 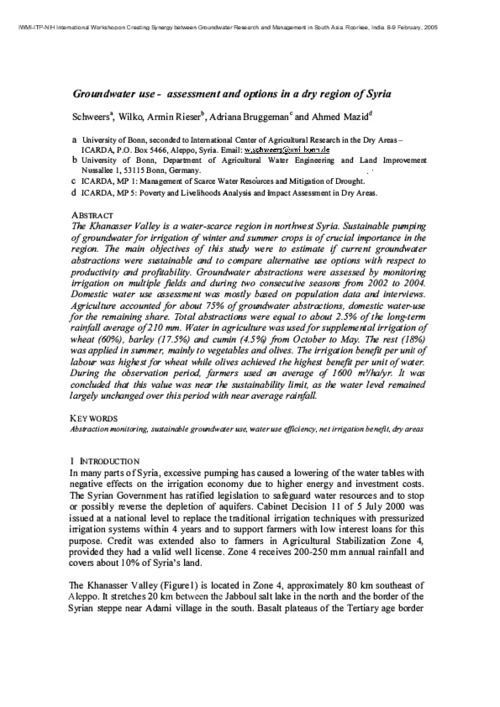 The Khanasser Valley is a water-scarce region in northwest Syria. Sustainable pumping of groundwater for irrigation of winter and summer crops is of crucial importance in the region. The main objectives of this study were to estimate if current groundwater abstractions were sustainable and to compare alternative use options with respect to productivity and profitability. Groundwater abstractions were assessed by monitoring irrigation on multiple fields and during two consecutive seasons from 2002 to 2004. Domestic water use assessment was mostly based on population data and interviews. Agriculture accounted for about 75% of groundwater abstractions, domestic water-use for the remaining share. Total abstractions were equal to about 2.5% of the long-term rainfall average of 21 0 mm. Water in agriculture was used for supplemental irrigation of wheat (60%), barley (17.5%) and cumin (4.5%) from October to May. The rest (18%) was applied in summer, mainly to vegetables and olives. The irrigation benefit per unit of labour was highest for wheat while olives achieved the highest benefit per unit of water. During the observation period, farmers used an average of 1600 m3lhalyr. It was concluded that this value was near the sustainability limit, as the water level remained largely unchanged over this period with near average rainfall.