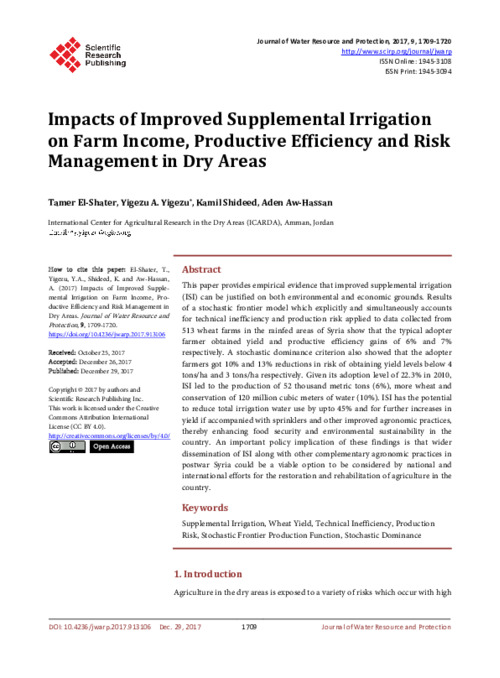 This paper provides empirical evidence that improved supplemental irrigation (ISI) can be justified on both environmental and economic grounds. Results of a stochastic frontier model which explicitly and simultaneously accounts for technical inefficiency and production risk applied to data collected from 513 wheat farms in the rainfed areas of Syria show that the typical adopter farmer obtained yield and productive efficiency gains of 6% and 7% respectively. A stochastic dominance criterion also showed that the adopter farmers got 10% and 13% reductions in risk of obtaining yield levels below 4 tons/ha and 3 tons/ha respectively. Given its adoption level of 22.3% in 2010, ISI led to the production of 52 thousand metric tons (6%), more wheat and conservation of 120 million cubic meters of water (10%). ISI has the potential to reduce total irrigation water use by upto 45% and for further increases in yield if accompanied with sprinklers and other improved agronomic practices, thereby enhancing food security and environmental sustainability in the country. An important policy implication of these findings is that wider dissemination of ISI along with other complementary agronomic practices in postwar Syria could be a viable option to be considered by national and international efforts for the restoration and rehabilitation of agriculture in the country.