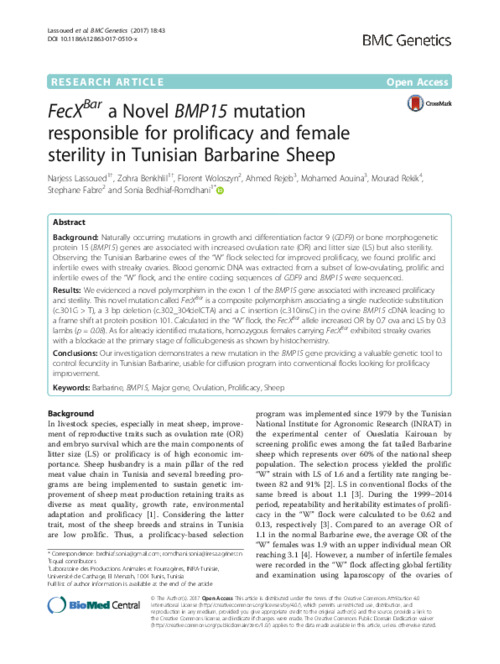 Background: Naturally occurring mutations in growth and differentiation factor 9 (GDF9) or bone morphogenetic protein 15 (BMP15) genes are associated with increased ovulation rate (OR) and litter size (LS) but also sterility. Observing the Tunisian Barbarine ewes of the “W” flock selected for improved prolificacy, we found prolific and infertile ewes with streaky ovaries. Blood genomic DNA was extracted from a subset of low-ovulating, prolific and infertile ewes of the “W” flock, and the entire coding sequences of GDF9 and BMP15 were sequenced. Results: We evidenced a novel polymorphism in the exon 1 of the BMP15 gene associated with increased prolificacy and sterility. This novel mutation called FecXBar is a composite polymorphism associating a single nucleotide substitution (c.301G > T), a 3 bp deletion (c.302_304delCTA) and a C insertion (c.310insC) in the ovine BMP15 cDNA leading to a frame shift at protein position 101. Calculated in the “W” flock, the FecXBar allele increased OR by 0.7 ova and LS by 0.3 lambs (p = 0.08). As for already identified mutations, homozygous females carrying FecXBar exhibited streaky ovaries with a blockade at the primary stage of folliculogenesis as shown by histochemistry. Conclusions: Our investigation demonstrates a new mutation in the BMP15 gene providing a valuable genetic tool to control fecundity in Tunisian Barbarine, usable for diffusion program into conventional flocks looking for prolificacy improvement.