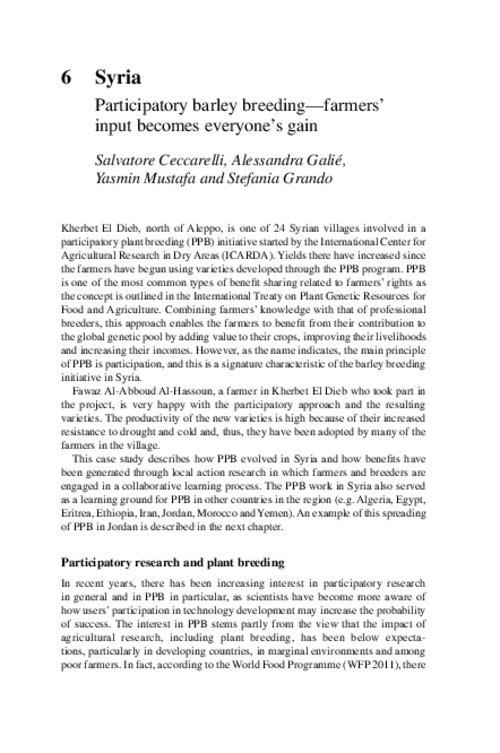 Kherbet El Dieb, north of Aleppo, is one of 24 Syrian villages involved in a participatory plant breeding (PPB) initiative started by the International Center for Agricultural Research in Dry Areas (ICARDA). Yields there have increased since the farmers have begun using varieties developed through the PPB program. PPB is one of the most common types of benefi t sharing related to farmers’ rights as the concept is outlined in the International Treaty on Plant Genetic Resources for Food and Agriculture. Combining farmers’ knowledge with that of professional breeders, this approach enables the farmers to benefi t from their contribution to the global genetic pool by adding value to their crops, improving their livelihoods and increasing their incomes. However, as the name indicates, the main principle of PPB is participation, and this is a signature characteristic of the barley breeding initiative in Syria. Fawaz Al-Abboud Al-Hassoun, a farmer in Kherbet El Dieb who took part in the project, is very happy with the participatory approach and the resulting varieties. The productivity of the new varieties is high because of their increased resistance to drought and cold and, thus, they have been adopted by many of the farmers in the village. This case study describes how PPB evolved in Syria and how benefi ts have been generated through local action research in which farmers and breeders are engaged in a collaborative learning process. The PPB work in Syria also served as a learning ground for PPB in other countries in the region (e.g. Algeria, Egypt, Eritrea, Ethiopia, Iran, Jordan, Morocco and Yemen). An example of this spreading of PPB in Jordan is described in the next chapter.