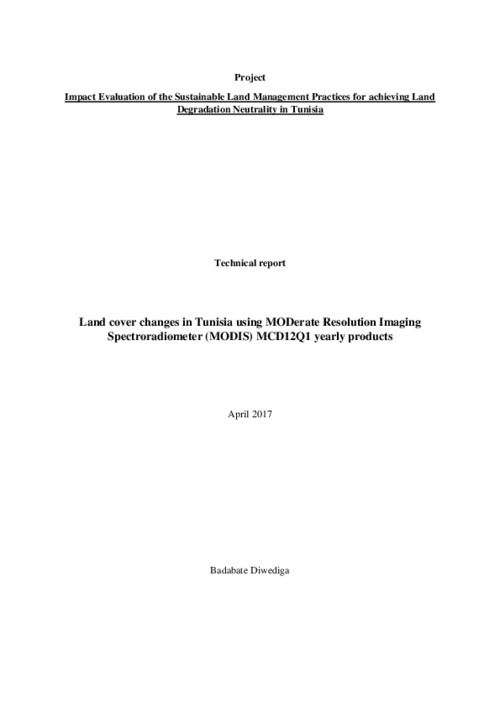 Land cover is one of the important components of the global geosphere-biosphere-atmosphere continuum and equilibrium. Regular information on land cover is necessary for a continuous monitoring of the Earth’s ecological balance. This study used the MODIS MCD12Q1 yearly data at 500 m resolution to evaluate the spatio-temporal changes in the national land cover of Tunisia. Land cover maps were generated for two years (2001 and 2013) and evaluated by other existing Global Land Cover data (Globcover, Google Earth) and field collected data sets. The overall evaluation accuracies were 63 % and 78 % for the maps of 2013 and 2001, respectively. Areal distribution analysis showed that barren/sparse vegetation areas were the most important LUC types in Tunisia for both years (68.07 % and 62.43 % in 2001 and 2013, respectively), indicating an area loss. Agricultural areas were of 2279722.04 ha (14.70 %) in 2001 and 2938599.54 ha (18.95 %) in 2013. The proportion of forests increased (more than double) from 0.27 % in 2001 to 0.57 % in 2013. Most important changes showed that the highest gain proportions occurred in the mosaic forest-savanna-grassland (7.22 %) and agricultural areas (5.15 %). Globally, there is a net increase of agricultural lands of about 659250 ha (4.25 % of the national lands) over the period 2001-2013. With the spatial resolution of the MODIS data, and the time window considered, caution should be given to the conclusions derived in this study. Further detailed studies using finer resolution satellite images could give more insights to the real changes occurred in specific land use/cover type at the country level.