An Economic Impact Assessment of Cooperation-88 Potato Variety in China 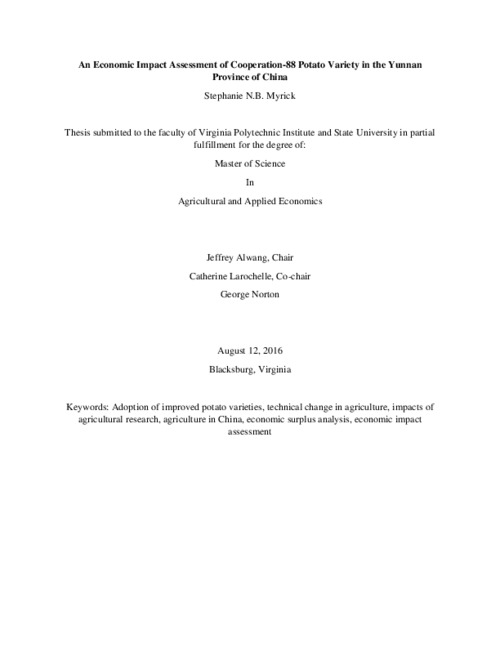 Cooperation-88 (C88) is a late blight resistant potato variety that was formally released in China in 2001 and has become popular in China’s Yunnan Province. The International Potato Center (CIP) and Yunnan Normal University collaborated to produce the variety, which is one of CIP’s most successful varieties. C88 is popular due to its high quality and taste, and it is used commonly in China’s expanding potato chip processing market. The purpose of this study is to examine adoption of C88 in the Yunnan Province, its value chain, and economic impacts. The analysis indicates that C88 is still popular with 16.8% of the potato area in Yunnan devoted to this variety in late spring 2015. To examine factors affecting household decisions to adopt and the intensity of their adoption, village adoption, household adoption, and household intensity of adoption were assessed. A village’s proximity to a metropolitan county was the most important factor explaining adoption and intensity of adoption. Households in villages closer to a metropolitan county disadopted at higher rates than those farther away. To quantify the economic benefits of C88 adoption, an economic surplus analysis was conducted. Total surplus changes ranged from $2 to 3 billion indicating significant economic benefits to consumers and producers in Yunnan.