Lentils in production and food systems in West Asia and Africa 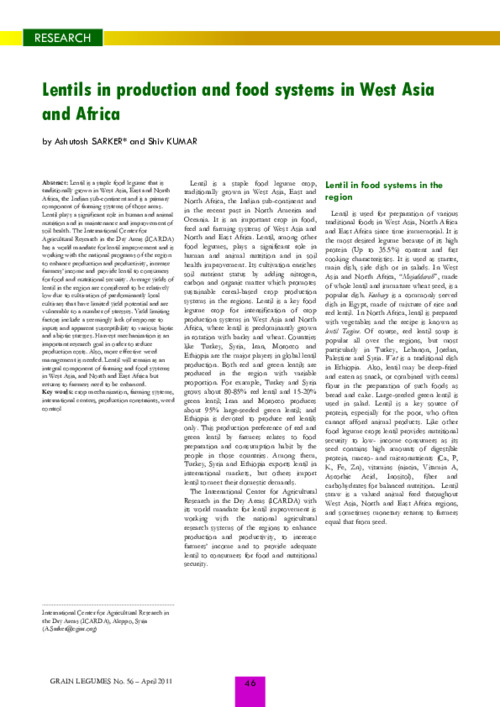 Lentil is a staple food legume that is traditionally grown in West Asia, East and North Africa, the Indian sub-continent and is a primary component of farming systems of those areas. Lentil plays a significant role in human and animal nutrition and in maintenance and improvement of soil health. The International Center for Agricultural Research in the Dry Areas (ICARDA) has a world mandate for lentil improvement and is working with the national programs of the region to enhance production and productivity, increase farmers‟ income and provide lentil to consumers for food and nutritional security. Average yields of lentil in the region are considered to be relatively low due to cultivation of predominantly local cultivars that have limited yield potential and are vulnerable to a number of stresses. Yield limiting factors include a seemingly lack of response to inputs and apparent susceptibility to various biotic and abiotic stresses. Harvest mechanization is an important research goal in order to reduce production costs. Also, more effective weed management is needed. Lentil will remain as an integral component of farming and food systems in West Asia, and North and East Africa but returns to farmers need to be enhanced.