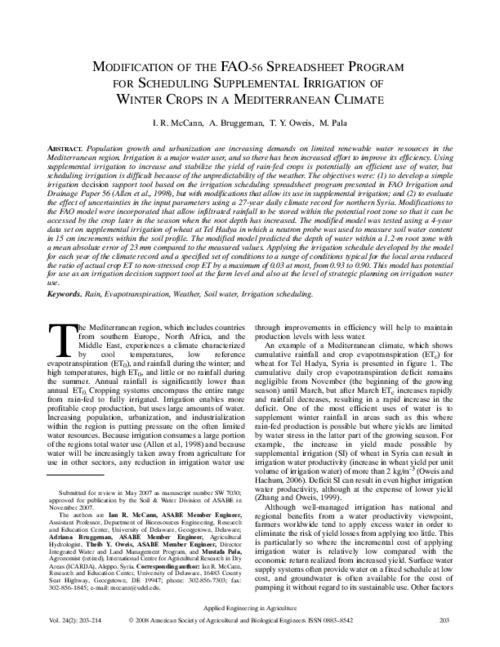 Population growth and urbanization are increasing demands on limited renewable water resources in the Mediterranean region. Irrigation is a major water user, and so there has been increased effort to improve its efficiency. Using supplemental irrigation to increase and stabilize the yield of rain‐fed crops is potentially an efficient use of water, but scheduling irrigation is difficult because of the unpredictability of the weather. The objectives were: (1) to develop a simple irrigation decision support tool based on the irrigation scheduling spreadsheet program presented in FAO Irrigation and Drainage Paper 56 (Allen et al., 1998), but with modifications that allow its use in supplemental irrigation; and (2) to evaluate the effect of uncertainties in the input parameters using a 27‐year daily climate record for northern Syria. Modifications to the FAO model were incorporated that allow infiltrated rainfall to be stored within the potential root zone so that it can be accessed by the crop later in the season when the root depth has increased. The modified model was tested using a 4‐year data set on supplemental irrigation of wheat at Tel Hadya in which a neutron probe was used to measure soil water content in 15 cm increments within the soil profile. The modified model predicted the depth of water within a 1.2‐m root zone with a mean absolute error of 23 mm compared to the measured values. Applying the irrigation schedule developed by the model for each year of the climate record and a specified set of conditions to a range of conditions typical for the local area reduced the ratio of actual crop ET to non‐stressed crop ET by a maximum of 0.03 at most, from 0.93 to 0.90. This model has potential for use as an irrigation decision support tool at the farm level and also at the level of strategic planning on irrigation water use.