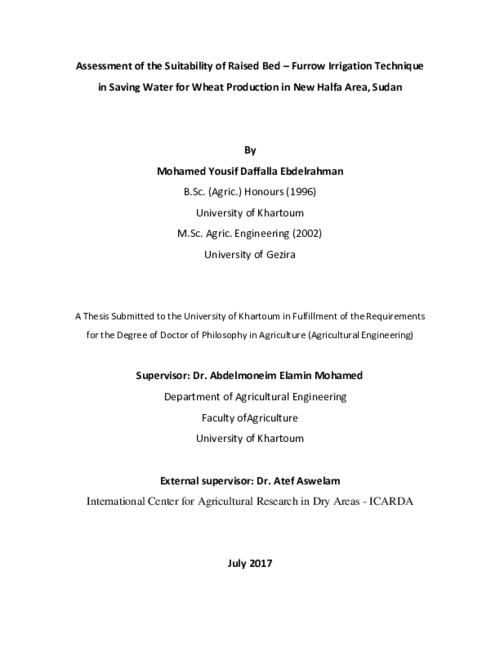 INTRODUCTION Agriculture in Sudan is the principal source of income and livelihood for 60 to 80% of the population (Elgali,2010). Agriculture is divided into two main sectors; irrigated and rainfed. The irrigated sector covers about 1.8 million ha including the Gezira, Rahad, New Halfa, Elsuki,White Nile and Blue Nile schemes. Gezira, Rahad and New Halfa are considered the most important, and they produce cotton, groundnut, wheat, sorghum and vegetables (Mahir and Abdelaziz, 2010). Sudan has the largest irrigated area in sub - Saharan Africa and ranked second only to Egypt on the continent in terms of irrigated agriculture. Commercial agricultural activities are mostly concentrated in a belt across the center of the country, known as the central clay plain, which extends approximately 1100 km from south to north between latitudes 10º and 14º North, in the arid, semi - arid dry Savannah zone ( UNEP, 2007). Agriculture in Sudan accounts for 97% of the country's water use ( Sullivan, 2010, Barton and Writer, 2012).The diversion of water to mechanized farms and intensive cultivation by rural farmers is contributing to the spread of arid conditions across Sudan (Barton and Writer,2012). Water is in high demand to meet the needs of the rapid population growth and food production and plans to expand agriculture through irrigation further raises the demand for water (Taha, 2010). Water requirement will become severe if the environmental factors are considered, such as increased desertification and degradation, which have intensified Sudan's water problems (Ashok, 2008). 2 Mahgoub (2014) stated that Sudan would face water deficit if it implemented its policy to extensively increase the area of irrigated land. Wheat is a cereal grain grown all over the world. It is the third most produced cereal after maize and rice and the staple food of millions of people. The world map (2017) shows a list of top ten wheat producers in the world. The European Union, which is an amalgamation of several European nations, tops the list. However, among other nations, China is the world’s second largest wheat producing nation, followed by Russia, USA and Canada. The total world wheat production between 1996-2011 is listed in Table 1.1. Sudan total cereals production is usually sufficient to meet domestic needs, especially in terms of sorghum and millet, but is a net importer of wheat (Ahmed, 2010). Wheat imports started to increase since 1990s up to 2006 which reflected the change in the population feeding patterns (Abbadi and Ahmed, 2006). Bread consumption has been widespread in both rural areas as a consequence of changing tastes, convenience and consumer subsidies. Table 1.2 shows the wheat production in Sudan from 1999 to 2004 and from 2010 to 2014. Sudan imports of wheat during 2009- 2014 shown in Table 1.3. Moreover, according to Sudan tribune (2014), Sudan imports about 2millions metric tons yearly which costs about 1.5 milliard Dollars. They added that Sudan wheat production covers about 35% of its demand in the best situations. Wheat is a strategic crop in Sudan produced under irrigation during the dry and comparatively cool and short growing season ( November - March).The main production areas of wheat in Sudan are the Northern State and in the central clay plains in the schemes of Gezira ( 168,000 ha) New Halfa (25,200 ha) and Rahad (18,900 ha) in the semi arid climate.