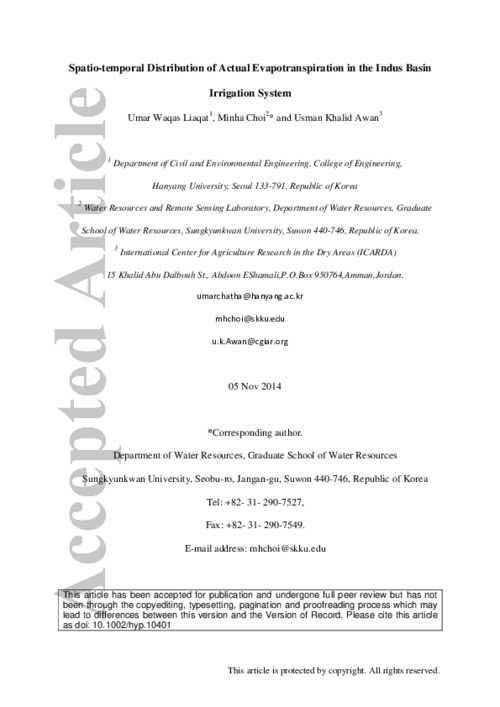 Strategic planning of optimal water use requires an accurate assessment of actual evapotranspiration (ETa) to understand the environmental and hydrological processes of the world’s largest contiguous irrigation networks, including the Indus Basin Irrigation System (IBIS) in Pakistan. The Surface Energy Balance System (SEBS) has been used successfully for accurate estimations of ETa in different river basins throughout the world. In this study, we examined the application of SEBS using publically available remote sensing data to assess the spatial variations in water consumption and to map water stress from daily to annual scales in the IBIS. Ground based ETa was calculated by the advection-aridity (AA) method, from nine meteorological sites and used to evaluate the intra-annual seasonality in the hydrological year 2009-2010. In comparison with the AA, SEBS computed daily ETa was slightly underestimated with a bias of -0.15 mm day-1 during the kharif (wet; April-September) season and it was overestimated with a bias of 0.23 mm day-1 in the rabi (dry; October-March) season. Monthly values of the ETa estimated by SEBS were significantly (P<0.05) controlled by mean air temperature and rainfall, among other climatological variables (relative humidity, sunshine hours, and wind speed). Due to the seasonal (kharif and rabi) differences in the water and energy budget in the huge canal command areas (CCAs) of the IBIS, ETa and rainfall were positively correlated in the kharif season and were negatively correlated during the rabi season. In addition, analysis of the evaporation process showed that mixed-cropping and rice-wheat dominated areas had relatively lower and higher water consumption rates, respectively, in comparison with other cropping systems in the basin. Basin areas under water stress were identified by means of spatial variations in the relative evapotranspiration (RET), which had an average value of 0.59 and 0.42 during the kharif and the rabi seasons, respectively. The hydrological parameters used in this study provide useful information for understanding hydrological processes at different spatial and temporal scales.