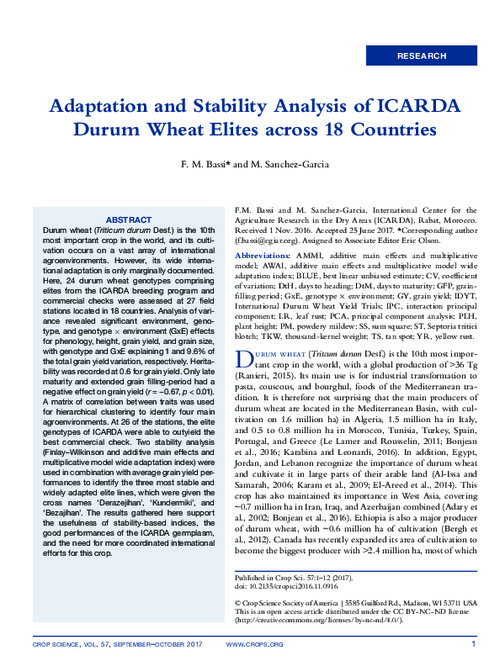 Durum wheat (Triticum durum Desf.) is the 10th most important crop in the world, and its cultivation occurs on a vast array of international agroenvironments. However, its wide international adaptation is only marginally documented. Here, 24 durum wheat genotypes comprising elites from the ICARDA breeding program and commercial checks were assessed at 27 field stations located in 18 countries. Analysis of variance revealed significant environment, genotype, and genotype × environment (GxE) effects for phenology, height, grain yield, and grain size, with genotype and GxE explaining 1 and 9.6% of the total grain yield variation, respectively. Heritability was recorded at 0.6 for grain yield. Only late maturity and extended grain filling-period had a negative effect on grain yield (r = −0.67, p < 0.01). A matrix of correlation between traits was used for hierarchical clustering to identify four main agroenvironments. At 26 of the stations, the elite genotypes of ICARDA were able to outyield the best commercial check. Two stability analysis (Finlay–Wilkinson and additive main effects and multiplicative model wide adaptation index) were used in combination with average grain yield performances to identify the three most stable and widely adapted elite lines, which were given the cross names ‘Derazejihan’, ‘Kundermiki’, and ‘Bezajihan’. The results gathered here support the usefulness of stability-based indices, the good performances of the ICARDA germplasm, and the need for more coordinated international efforts for this crop.