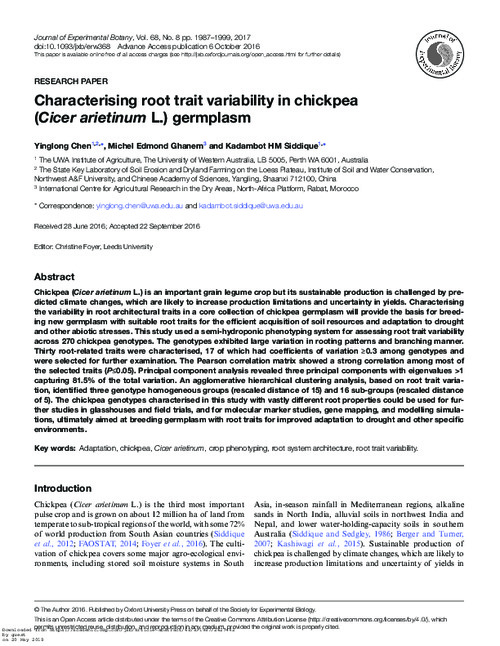 Chickpea (Cicer arietinum L.) is an important grain legume crop but its sustainable production is challenged by predicted climate changes, which are likely to increase production limitations and uncertainty in yields. Characterising the variability in root architectural traits in a core collection of chickpea germplasm will provide the basis for breeding new germplasm with suitable root traits for the efficient acquisition of soil resources and adaptation to drought and other abiotic stresses. This study used a semi-hydroponic phenotyping system for assessing root trait variability across 270 chickpea genotypes. The genotypes exhibited large variation in rooting patterns and branching manner. Thirty root-related traits were characterised, 17 of which had coefficients of variation ≥0.3 among genotypes and were selected for further examination. The Pearson correlation matrix showed a strong correlation among most of the selected traits (P≤0.05). Principal component analysis revealed three principal components with eigenvalues >1 capturing 81.5% of the total variation. An agglomerative hierarchical clustering analysis, based on root trait variation, identified three genotype homogeneous groups (rescaled distance of 15) and 16 sub-groups (rescaled distance of 5). The chickpea genotypes characterised in this study with vastly different root properties could be used for further studies in glasshouses and field trials, and for molecular marker studies, gene mapping, and modelling simulations, ultimately aimed at breeding germplasm with root traits for improved adaptation to drought and other specific environments.