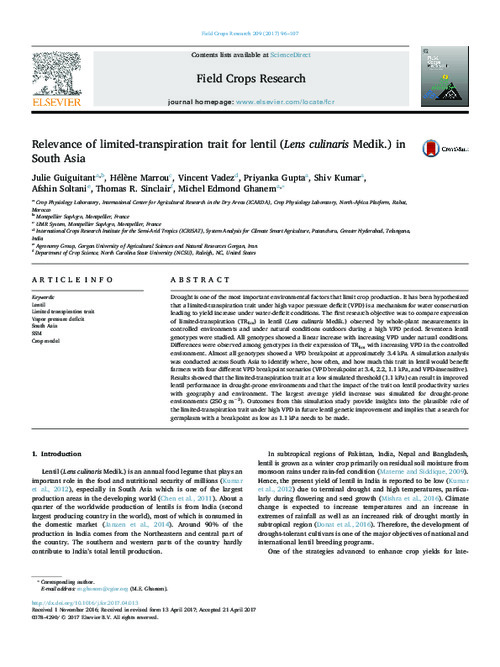 Drought is one of the most important environmental factors that limit crop production. It has been hypothesized that a limited-transpiration trait under high vapor pressure deficit (VPD) is a mechanism for water conservation leading to yield increase under water-deficit conditions. The first research objective was to compare expression of limited-transpiration (TRlim) in lentil (Lens culinaris Medik.) observed by whole-plant measurements in controlled environments and under natural conditions outdoors during a high VPD period. Seventeen lentil genotypes were studied. All genotypes showed a linear increase with increasing VPD under natural conditions. Differences were observed among genotypes in their expression of TRlim with increasing VPD in the controlled environment. Almost all genotypes showed a VPD breakpoint at approximately 3.4 kPa. A simulation analysis was conducted across South Asia to identify where, how often, and how much this trait in lentil would benefit farmers with four different VPD breakpoint scenarios (VPD breakpoint at 3.4, 2.2, 1.1 kPa, and VPD-insensitive). Results showed that the limited-transpiration trait at a low simulated threshold (1.1 kPa) can result in improved lentil performance in drought-prone environments and that the impact of the trait on lentil productivity varies with geography and environment. The largest average yield increase was simulated for drought-prone environments (250 g m−2 ). Outcomes from this simulation study provide insights into the plausible role of the limited-transpiration trait under high VPD in future lentil genetic improvement and implies that a search for germplasm with a breakpoint as low as 1.1 kPa needs to be made.